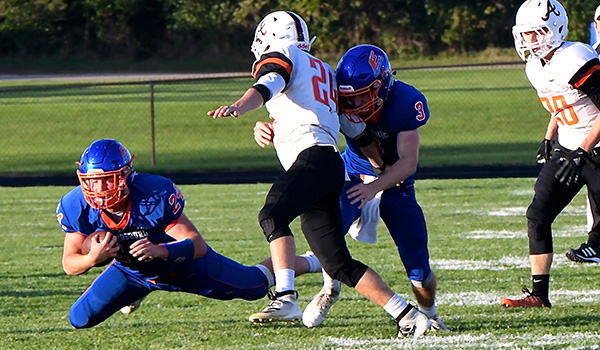 EDWARDSBURG — A 40-point first quarter was all host Edwardsburg needed to secure its 22nd consecutive victory as the Eddies rolled to a 63-20 Wolverine Conference victory over Allegan Friday night.

The win also set up a showdown with undefeated Paw Paw for the conference championship Friday night.

Conner Nelson opened the first-quarter scoring with a 62-yard touchdown pass to Dillon Hursh. Hursh would also score on a four-yard run.

Mac Gaideski, who had 134 yards rushing on eight carries, scored on runs of 21 and 26 yards in the opening 12 minutes.

Drew Bidwell had the other first-quarter touchdown for the Eddies, who improved to 8-0.

Caden Calhoun scored twice in the second quarter as Edwardsburg extended its lead to 56-0 by halftime.

The final touchdown for the Eddies came in the fourth quarter when Logan McColley scored on a five-yard run.

Edwardsburg ended the evening with 391 yards of total offense, including 329 on the ground. Nelson was 1-for-2 for 62 yards.

The Eddies limited the Tigers to 214 yards of total offense.

EAU CLAIRE — Owen Gardner ran for 72 yards and scored three touchdowns as visiting Cassopolis improved to 8-0 with a... read more