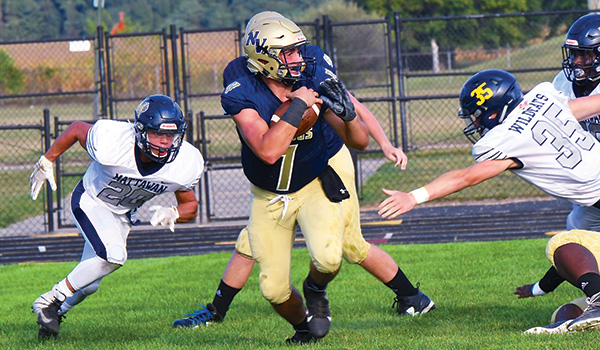 Vikings need only one score to top Giants 7-6

KALAMAZOO — One down and two to go.

The Niles football team will wrap up the 2019 season by playing three straight schools with Central at the end of their names.

The Vikings took the first step toward finishing the year on a high note by defeating host Kalamazoo Central 7-6 Friday night.

Niles needed just one play to pull out the victory and a lot of help from its defense against the Maroon Giants.

The one play was a 13-yard touchdown pass from Brayden Lake to Dylan Caniff in the second quarter, which erased Kalamazoo Central’s 6-0 lead.

The Maroon Giants (2-5) scored on a 57-yard touchdown run in the opening quarter.

Neither team had much success moving the football Friday night. Niles had just 175 yards of total offense, while Kalamazoo Central had 180 yards.

The lack of offense was not because the two teams did not have the ball. In fact, both teams had more than 50 offensive plays in the game, but could not gain any traction on the wet field. And despite the weather, there was just one turnover in the contest, a fumble by the Vikings.

Canniff rushed for 81 yards on 23 carries and had two receptions for 26 yards playing in place of Javond Ball.

DOWAGIAC — With temperatures in the middle to lower 30s and wind chills closer in the mid-20s, the goal of... read more