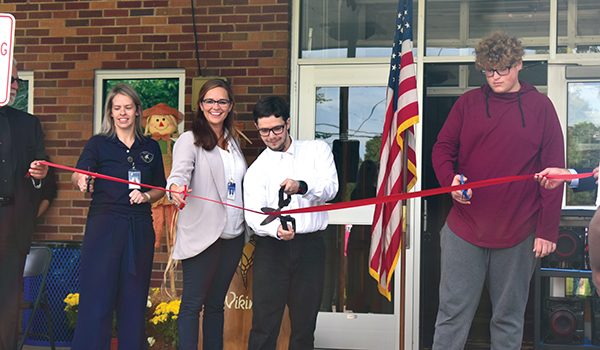 NILES — From north to south, Niles Community Schools’ buildings have been officially updated.

With a student chant and a choral song respectively, staff and students at Northside Development Center and Southside School celebrated rededications of their buildings.

The updates to the 68-year-old buildings were the result of a 2015 district bond passage. The two schools were the last district buildings to receive updates over a few-year process.

At Northside’s rededication ceremony, Superintendent Dan Applegate talked about the history of the school bond in a way that its Kinder-Connections, special education, Early Learners and Montessori students could understand.

“I had to go out and ask people in the community, people that you live with — your moms, your dads, your uncles, your aunts,” he said. “I said, ‘Could you please offer us support? Could you vote and say ‘yes’ so that we can make some changes at Northside?’ Guess what they said?”

“Yes!” shouted one student in the audience.

Hertsel walked down Southside’s halls, pointing out the new additions that the district’s budget could not take on without the bond. He frequently pointed out the new heating and cooling systems in each classroom, which he said may not be a visible change but could be the most felt.

Each teacher has some ability to control the heating and cooling in their classroom, and the systems also allow for air from outside the school to come in.

The school district has the ability to shut off the outside air systems across all their buildings in case contaminants, such as smoke from a fire, were to otherwise waft in.

That control is part of a larger effort to increase security in the district. Niles has installed security cameras around school grounds and buzzers at locked school entrances.

All of the bond renovations could not be completed when students were out of school. Some students and teachers had to move classrooms, sometimes into smaller spaces than before.

Students showed their appreciation at both rededication ceremonies. Southside students formed a miniature choir to sing Bruno Mars’ “Count on Me.”

Students at Northside shouted a chant. Students taking up one side of the hall would shout one line, and students across the way would repeat it.

“We love Northside, yes we do,” they chanted. “We love our letters and numbers, too. We like to play and sing and chant. We know our teachers really care.”

Northside principal Jennifer Shabazz said many teachers were appreciative of the changes the district made to their building. Many had worked at Northside for upwards of 25 years. This was their first large physical change they had seen in the classrooms.

“The saying is, ‘Viking pride begins at Northside,’” she said.

Applegate shared a similar sentiment in his speech to his youngest students.

“You’re going to do great things,” he said. “I’m looking forward to that. I’m going to see you guys every year in every building that you’re in, and I’m going to brag about you.”

In each building these students move up to, they will see the changes, perhaps unknowingly, that the 2015 bond brought them.

NILES — Steampunk and tea may seem be like peanut butter and jelly to fans of the literary genre —... read more