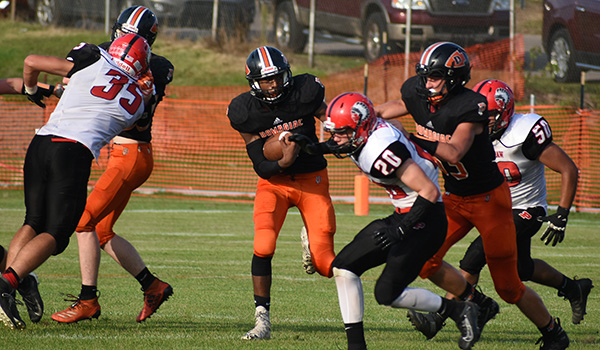 That plan seemed to be working as the Chieftains raced out to a 20-0 first quarter lead.

The Chieftains regroup and regained control of the game thanks to a punishing running game led by senior D.J. Lanier. In the end, the Trojans were no match for the Lanier or the Chieftains, who went on to win 40-24 to keep its playoff hopes alive.

“The plan was going just like we thought,” said Dowagiac coach Randy Brooks. “I think the turnovers hurt us again. The penalties and all those little mistakes. We probably lost the turnover battle and one this game. That is hard to do.”

Not all the turnovers showed up on the stat sheet. Like the botched pooch kick by the Trojans that Dowagiac failed to field and Sturgis recovered to grab the momentum in the third quarter.

Fortunately for the Chieftains, they were able to run the ball effectively throughout the game with Lanier as the offensive line, including homecoming king Luke Staten, opened up huge holes.

And when those holes were not very big, Lanier ran over and threw people, gaining 177 yards on 21 carries and scoring four touchdowns. All were career-highs for the senior running back.

“The offensive line did a good job coming off the ball,” Brooks said. “I was proud of the way the guys responded to the adversity we were facing. He [Lanier] is a talented athlete. He runs hard and his competitiveness is his great trait.”

Dowagiac will now set its sights on Vicksburg. The Chieftains must win their remaining games to earn an automatic qualifying spot.

Kickoff for Friday night’s game is set for 5 p.m.

NILES — For the past couple of weeks, the Niles volleyball team has been struggling. Granted, it has been against... read more