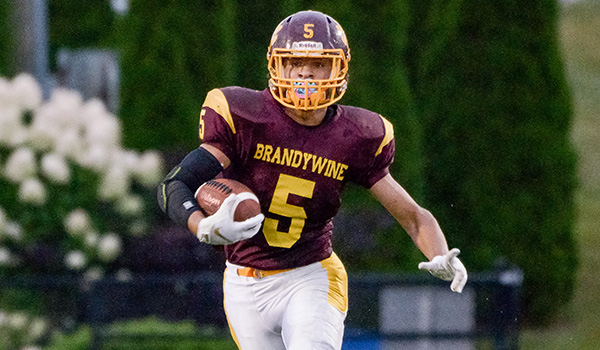 Defense shines as Brandywine wins and qualifies for playoffs

COMSTOCK PARK — Before the season began, Brandywine knew that NorthPointe Christian was going to be a daunting task.

The host Mustangs (4-2) were a win away from playing for a Division VI state title three years ago, and this season are having a bounce-back year from a lackluster 2018 season.

Brandywine’s defense kept true to the pedigree it has shown all season holding NorthPointe to only 146 total yards of offense as the seventh-ranked (Division 6) Bobcats remained undefeated and controlled the clock for a 31-8 victory Friday night to clinch their second consecutive playoff berth (seventh overall).

Right away the Bobcat defense took advantage of a botched kickoff return by NorthPointe which led to a safety as senior Connor Janowiak sacked quarterback Drew Wurn in the end zone.

Brandywine controlled the ball for long drives and milked the clock all night long, starting with junior Gabe Gouin scampering for a 10-yard touchdown run to go up 10-0 after one quarter.

NorthPointe got its passing game going as they marched down the field on a 90-yard drive for Hayden Koehler to punch it in for a three-yard score to cut the deficit to two.

It was all Brandywine the rest of the way as they drove 85 yards for another touchdown run by Gouin from five yards out. The last play of the half Brandywine drove the ball 58 yards that resulted in a two-yard touchdown reception by senior Jaelen Briggs from Gouin.

The second half was about staying on the ground. Senior Jordan Abrams helped lead the way with 23 carries for 172 yards.

The only score came from Gouin finding Briggs again this time from 25 yards away.

Brandywine had a total of 35 minutes on time of possession compared to NorthPointe’s 13 minutes. The offense finished with 388 total yards (324 rushing, 64 passing) while holding the Mustangs to only 16 yards on the ground. Gouin finished with 164 all-purpose yards and four total touchdowns.

Brandywine travels to Gobles (3-2) Friday with the start time currently set for 5 p.m.

Bucks knock off Saugatuck to improve to 2-4

BUCHANAN — Buchanan’s football team knows a thing or two about making recoveries, and in its 26-18 win over Saugatuck,... read more