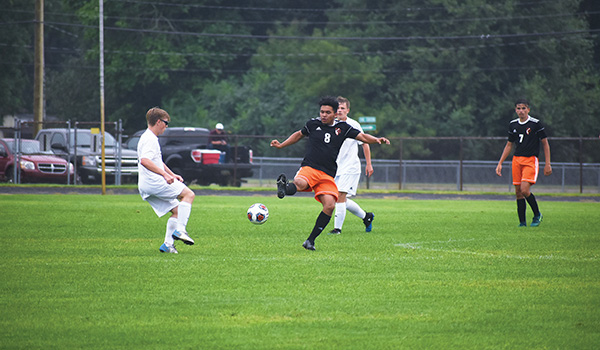 DOWAGIAC — For the first 25 minutes of Dowagiac’s regular season and Wolverine Conference finale against visiting Paw Paw, the Chieftains made it look easy.

Goals by Matt Mosier and Cristian Wilson in the 16th and 19th minutes had Dowagiac leading 2-0.

Unfortunately, the Chieftains stopped doing what got them a two-goal lead. They allowed Paw Paw to get back into the match with a goal by Joey Pastino in the 31st minute.

The score would remain 2-1 at the break.

Three second-half goals by Paw Paw, including a pair by Josh Reshmon, gave the visitors a 4-2 victory.

Veteran Dowagiac coach Mike Williams was displeased with the way his team played, not only against Paw Paw Wednesday night, but the way it has played the past five or six matches.

The Chieftains got off to a great start, fashioning a 12-1 record with 67 goals scored. Then Dowagiac headed into the toughest part of its 2019 schedule against the Wolverine Conference teams.

The Chieftains finished with a 4-5 record, which Williams felt could have been 5-4 at least.

“We haven’t played 80 minutes in probably six to eight games,” he said. “Tonight, we played 25 really good minutes. From then on out we started playing the kick game again. When we play the teams that play the kick and chase, we get beat on the kick and chase and the foul them and they get a free kick off of it and three goals.”

Williams and his team will have a few days of practice to work on correcting the problem before they open up Division 3 district play on Wednesday against visiting Brandywine.

Dowagiac’s match against Berrien Springs, which would have been a good team to work on correcting its mistakes, was supposed to be played on Thursday, but was canceled.

Williams knows what his team is capable of, but also knows that he has a lot of sophomores on the squad that can at times drop back into some bad habits.

“It is not about playing soccer,” he said. “It is about keeping your composure, keeping it together and playing our game. We are not good at kickball at all. When you are playing against teams play from defense to forward. If you handle the mid, you do not have to worry about that. That is what we did the first 25 minutes. After that, we stopped moving together as a team and started playing the kick game again.”

Dowagiac will be a huge favorite in its district opener against the Bobcats having already defeated Brandywine 8-0 earlier in the year. Unfortunately, the Bobcats do not play the kind of style that would allow the Chieftains to work on fixing the issue that plagued them against Paw Paw.

Dowagiac will need to figure out how to play a full 80 minutes of soccer quickly or it will not be able to successfully defend its back-to-back Division 3 district titles.

“We can play a half,” Williams said. “We cannot play a full game. We get up [on the scoreboard] and then we sit back. Then we get down and we start panicking. Everything you do not want them to do is what we are doing for one half.”

Brandywine and Dowagiac will open up the district tournament at 4:30 p.m. Wednesday.

NILES — There were no illusions for the Niles volleyball team as it hosted No. 5-ranked (Division 1) Mattawan in... read more