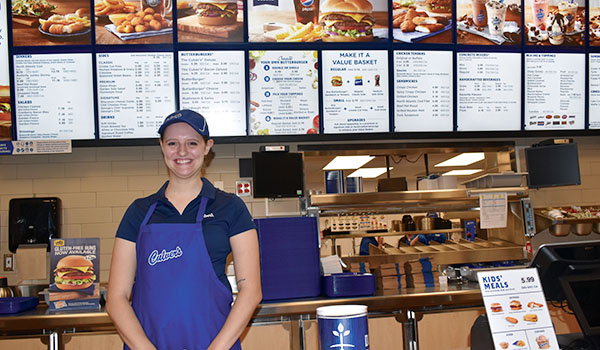 NILES CHARTER TOWNSHIP — When Katie Rose joined the Culver’s team at 16 years old, she said she was surprised to have gotten the job. She was shy and nervous during her interview.

Now, a few years later, the Brandywine Community Schools alumna is the owner and operator of a new Culver’s at 1410 S. 11th St. in Niles Charter Township that will open 10 a.m. Monday.

“I thought it was just a job to pay for gas,” she said, recalling her first role at the Culver’s in Mishawaka.

Rose moved up through Culver’s employment positions, going from team member to shift leader to area training manager to district manager. She will take her experience in job training, hiring and operations into her new leadership role.

“I’ll be on the floor with the team,” she said. “I’m not just sitting in an office or at home. I have to assess all the stations. I’d say I’m pretty proud of that.”

Her Culver’s — which serves butter burgers, custard and cheese curds — has garnered a lot of attention on local Facebook community groups over the past few months as it was built along the main thoroughfare between South Bend and Niles.

The hype translated into the hiring process, too. Rose said more than 300 applications were obtained.

“That was also surprising,” she said. “That’s usually a problem at openings, not having enough people, but that has not been our problem.”

While all staff have been hired from the local area, she said she will hold onto the remaining applications for when job openings appear.

On Wednesday, Rose was preparing to train her staff inside her restaurant. The blue, gray and white interior gleamed, and construction crews worked to put on the restaurant’s final touches, from ceiling work to bright lines to guide drive-through customers.

Rose said the work put into building the restaurant and hiring and training those running it has been busy, but it has flown by fast. Aside from a delay in breaking ground on the project, development has been on schedule.

She is excited to open up Culver’s Monday and to provide the core values of the Wisconsin-based chain to customers: serving good food and good service.

“We don’t have a heating element that just holds all our meat products and our chicken sandwiches and all that,” she said. “We make it for the guest. It’s nice to have a personal touch to it.”

Values of good food and service were what drew Rose to her first job at Culver’s and later as an owner. She had been a Culver’s fan for years before, however.

As she grew up in Niles, Rose and her family would often drive out to Mishawka’s Culver’s to eat their custard and burgers.

When Rose graduated from Brandywine in 2015, she initially planned to become a teacher, using her management jobs at Culver’s to build teaching experience.

As she moved farther along in Culver’s leadership roles, she found a new passion, and as she attended Culver’s openings and met with other leaders, she learned that Niles Charter Township was a prime location for a new franchised restaurant.

So, she brought one to town.

Rose will offer an opportunity for free food to her most eager neighbors when Culver’s opens Monday. The first 100 customers will receive one free pint of ice cream a month for a year.

Regardless of one’s place in line, Rose recommended a few items to first-time goers: Culver’s Deluxe, made with beef, cheese, lettuce, tomatoes, pickles, red onion and mayo on a buttered, toasted bun; Wisconsin Cheese Curds, made with deep-fried yellow and white cheddar cheese; and any variety of its customizable custards, with flavors and toppings up to the individual.

First is the limited-time Pretzel Haus Pub Burger, made with beef, cheddar cheese, bacon, pickled onions and bistro sauce. Second is broccoli, which replaces green beans as a side dish.

DOWAGIAC — The Pokagon Band of Potawatomi Indians will be celebrating Harvest Day this weekend for its members and staff... read more