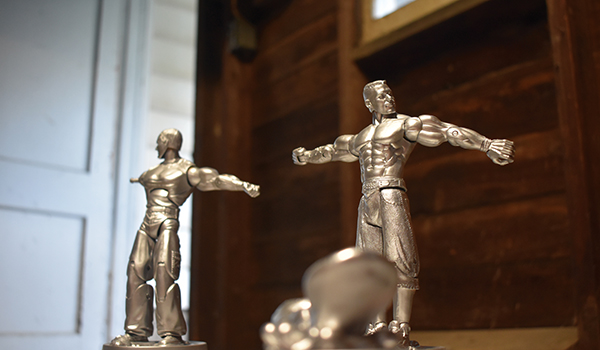 NILES — Look up above the rows of liquor at The Brass Eye bar in Niles, and one might see a painted Troll Doll with rhinestone eyes looking back. Look up from a package at Niles’ UPS store, and one might see the doll’s companion atop a cat food container, as if standing guard.

Travis Timm gifted the creations to each business. After work, government meetings and between football gameplay, the Niles councilman makes trophies out of kitschy items.

First, he finds novelty items, from World Wrestling Entertainment figurines to gag Halloween ears. Then, he paints them and glues them atop a can or a jar. Sometimes rhinestones are added as a bedazzling effect.

More than 30 trophies in various stages of completion are among bookshelves in Timm’s home office or in his garage drying from a fresh coat of paint.

Others are in homes and businesses of those who have purchased what Timm calls his “trashy trophies.”

“It can be something that’s so boring and common,” he said of the trophies’ centerpieces. “It’s something that you wouldn’t display it in your house. But if you glue it on a can of cat food, put some rhinestones on that bad boy and some metallic paint, it’s got a whole new life.”

Timm said he has found a customer base that appreciates the quirkiness of his items. People have begun to request his trophies for events such as golf outings, workplace awards and fantasy sports leagues.

A “trashy trophy” can make a moment more memorable, he said.

The trophies — usually made of simple toys, food containers and craft store products — are not high quality, but Timm said that is part of the appeal.

“It’s not a perfect process, but it’s not meant to be, either,” he said.

The lower quality also allows him to sell his products at a low cost, he said. His business goal is not to make a large profit but to inspire a laugh and find a customer base.

After all, it is a side project. Between a full-time job and local government positions, he tends to his creations when he can. If anything, his “trashy trophies” give him a hobby that he has not had in years.

“It’s been a nice creative outlet,” he said. “I studied writing in college and I did a lot of student films in college. I was really creative at that point in my life.”

The venture has allowed Timm to connect with his community in ways outside of his work and councilmember roles. He scours garage and estate sales for figurines and statue busts. He makes frequent stops at ‘Cross the Street in downtown Niles.

He also plans to set up a booth at Oddiophiles, a future vendor-based oddity art and audio store coming to 207 N. Second St. this fall.

Timm said ventures like his and incoming businesses such as Oddiophiles, as well as an alternative art gallery and a rare bookstore, add character to Niles, making the city come alive.

“The arts are extremely important,” he said. “I think we need to get that pumped up everywhere, but it would it be nice to have an art scene in Niles.”

Timm has been asked to extend his homespun art techniques through workshops, but he said he will have to think of ways to minimize his spray paint and strong glue use so as to not put children in harm’s way.

For now, the councilmember is working on improving his product — as much as a kitschy product made of reused household items can be.

Timm is preparing to test out labels to make his trophies customizable and protective coatings to keep his trophies’ bling from coming off.

He is also experimenting with larger trophies, such as awards made out of statue busts or whose bases are wooden boards.

As the fall brings colder weather, Timm will continue to look for trinkets at the dwindling yard sales in the area, too.

“It’s nice to see that I can take something that most people think is garbage and turn it into a trashy trophy,” he said.

Prospective trophy buyers can message Timm through the Facebook page “Trashy Trophies,” the Instagram page “trashy.trophies” or by visiting Oddiophiles when it opens.

DOWAGIAC — Bridges are known for connecting people, and on Tuesday, leaders from the Pokagon Band of Potawatomi Indians stood... read more