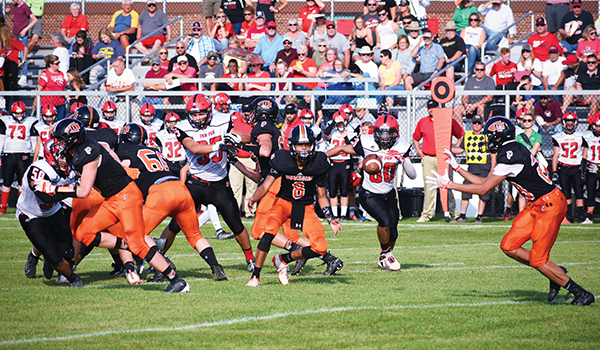 DOWAGIAC — A series of second-half mistakes turned a competitive Wolverine Conference football game between Paw Paw and host Dowagiac into a lopsided affair.

The Chieftains ended up on the wrong end of a 40-14 score against No. 1-ranked Division 4 Paw Paw at Chris Taylor-Alumni Field Friday afternoon. The game time was moved up to 5:15 p.m. due to an outbreak of Eastern Equine Encephalitis, which caused at least two deaths in Cass and Van Buren counties.

While first-year Dowagiac coach Randy Brooks will not use that as an excuse, there is no doubt that with the temperatures soaring into the mid-80s and staying there throughout the game did have an effect on his squad, which was much smaller than Paw Paw.

The Chieftains (2-2) were able to hang with Paw Paw throughout the first half and took a 14-10 lead into the locker room at halftime following an 87-yard kickoff return for a touchdown by De’Ondray Henry late in the second quarter.

The second half was a much different story as Dowagiac was unable the stop the bigger and stronger Paw Paw offensive line and running backs. A series of penalties and turnovers also played into the visiting team’s hands as it outscored the Chieftains 30-0.

“[Paw Paw] made some mistakes in the first half, but they are very good upfront on both sides of the ball,” Brooks said. “They are strong and big. I think we had a speed advantage on them, but they came off the ball and did a nice job. I thought Conner Hindenach was a man out there blocking. Their two tight ends did a really good job.”

With that being said, Brooks felt his team was able to compete with Paw Paw.

“We are still making some fundamental mistakes like reading things on defense and those little mistakes are hurting,” he said. “And that was even in the first half when we had the lead. The second half, things got away from us. The blocked punt was the start of it.”

Trailing 18-14 late in the third quarter, Dowagiac’s Dashawn Brooks picked off a pass at the Chieftains’ one-yard line to keep Paw Paw out of the end zone.

But after the teams flipped ends of the field to start the final quarter, Dowagiac was forced to punt out of its own end zone, which was blocked and recovered by Paw Paw’s Will Marshall for a touchdown.

Paw Paw then took advantage of back-to-back special teams breakdowns on kickoffs by the Chieftains, which it turned into 14 points a win.

Brooks said that and the mistakes his team committed Friday night are ones that can be addressed in practice.

“We will learn from it and get better,” he said. “A lot of those are correctable mistakes. We’ve got to have a good week of practice to get ready for Plainwell.”

Dowagiac answered with a drive that ended with a 12-yard D.J. Lanier run that featured him running over a Paw Paw defensive back at the one-yard line.

After Paw Paw kicked a field goal to make it 10-6, Henry returned the ensuing kickoff for a score and Brooks added the conversion run to give Dowagiac its 14-10 lead.

“We had some people who hustled down the field to throw blocks,” Brooks said of the return. “Deny White threw a good block around the 15-yard line to help get him into the end zone.”

Dowagiac finished the night with just 177 yards of total offense.

The Chieftains rushed for 69 yards, led by Lanier’s 31 yards on seven carries. Cailyn Murphy was 7-of-10 throwing the football for 58 yards.

On defense, besides Brooks’ interception, Dowagiac got a fumble recovery from Alex McIntosh.

Hunter Williamson led the team with 11 tackles, while Lamberto Paredes had 10 tackles.

Dowagiac travels to Plainwell for its next Wolverine Conference game Friday night. Kickoff of tentatively set for 7 p.m.

DOWAGIAC — The Dowagiac volleyball team did not have its “A” game against visiting Paw Paw Thursday night, but the... read more