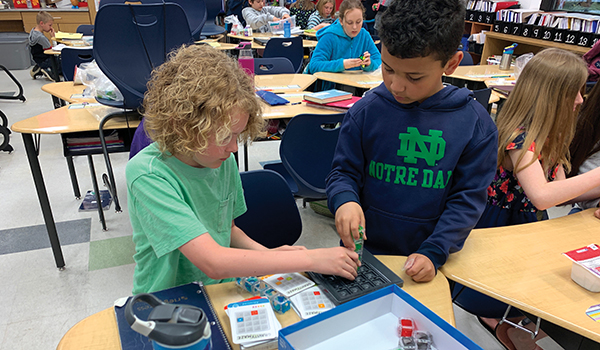 HOWARD TOWNSHIP — When Sara Grishaber’s fourth-grade Howard-Ellis Elementary students enter her classroom Monday mornings this fall, they might pick up a board game rather than a textbook.

Late last school semester, Grishaber was awarded a $500 grant from the Niles Education Foundation to create a classroom program she saw a fellow Instagramming teacher implement: a period of play to start and close the school week.

Grishaber’s students will be able to choose from an assortment of games and toys to collaboratively play with for the first 20 minutes of Monday classes.

“[We’re] starting the day with games, activities, puzzles, just to kind of ease them into the day,” she said. “Usually, we start our morning with morning work, and it’s usually an academic workshop. This kind of gives them a chance coming off the weekend to ease into the school day.”

She will call the program Soft Starts, referring to the way the program is meant to gently bring students into a school mindset at the start of the week.

It is opposite of a “hard start” of immediate school lessons, which Grishaber said can cause stress before students even enter Howard-Ellis.

Grishaber followed her fellow teacher’s progress with her own Soft Start-esque program, and Grishaber was surprised to read its positive effects.

“One of the big things was attendance,” she said. “The kids knew every Monday morning and every Friday morning that it would get to start their day. Kids that were chronically tardy made it to school on time.”

Another effect was in student relationships. When Grishaber tested the program during the last few weeks of school, she saw students that normally did not work with one another play together.

“There was never an argument over who was playing with what when somebody wanted to use it,” she said. “That never happened. They mostly picked something different each week to try.”

Grishaber will limit the program to Monday mornings for the time being, but she said she is not opposed to expanding it to Fridays when students have behaved well and have worked hard during the days prior.

“Being off for the weekend, it takes some kids a long time to adjust into the routines of the day,” she said.

Howard-Ellis’ principal, Michelle Asmus, will be helping Grishaber track progress of the program to see if it should be implemented in other classrooms.

Grishaber will personally keep track of attendance data to see whether Soft Starts brings in students that are habitually tardy or absent.

Some children want it to expand. Grishaber said her previous students had already spread the word of Soft Starts to children in other classrooms last year.

“Their enthusiasm was great to see,” she said.

Grishaber and three other NEF grant recipients will be recognized at the foundation’s Legendary Evening event Aug. 9 at Fifty5 at the Grand LV in Niles.

“I was excited that they chose it,” she said. “I think I had the money spent in three days.”