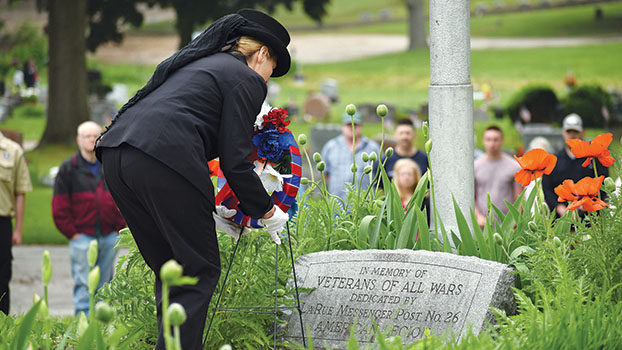 TOP: Military officers lead a parade up Main Street in Niles to commemorate Memorial Day. ABOVE: A wreath is placed in front of a veteran memorial at Silverbrook Cemetery. (Leader photos/AMBROSIA NELDON & KELSEY HAMMON)

NILES — In the minutes leading up to Niles Memorial Day Parade Monday, people all along Main Street staked out their viewing spot on patches of grass.

Dozens turned out to take part in the tradition. Many waved American flags, and a number of veterans wore ball caps, stitched with their branch of service. For many, the parade was a way to celebrate their freedoms and remember the veterans who died fighting for it.

The annual Memorial Day Parade was hosted by the American Legion Post 26. The parade included dozens of floats and music performed by the Niles High School and Brandywine High School marching bands. The parade started at State Street and proceeded down Main Street to Silverbrook Cemetery for a ceremony to honor fallen veterans.

Among those watching the parade were Niles residents Sherry Hinegardner and Joan and Joe Benjamin. For Hinegardner, the parade has been a yearly tradition since she was a child.

Joe, an Army veteran who served in 1953, said the parade also made him think about traditions and his father, Clarence Benjamin – a World War I veteran.

“My dad was in World War I, and he always liked parades,” Joe said. “That’s how we got started [watching the parade].”

Just down the street Airforce veteran Tom Weir, of South Bend, sat with his wife, Pearl Weir. Tom served from 1958 to 1962. Both emphasized the importance of remembering the meaning of the holiday.

“There are so many [people] that don’t even care — they should show their respect,” Tom said. “A lot of young people don’t realize what it’s about.”

As he looked down the street Monday, Tom said he was proud to see the community turn out to remember veterans.

“I think that is why they are lining up,” Tom said. “This means a lot to veterans.”

“We look around at all the flags on the gravestones today, and we know that they are marking the sacrifices so many made so that we can enjoy the freedoms we have,” Smith said.

Berrien County Sheriff Paul Bailey, who has helped to lead the Niles parade for 19 years, was selected as the guest speaker. Bailey encouraged the crowd to reflect on the men and women who died serving their country.

“Many died far away, like the bitter cold of Korea, the rat-infested jungle of Vietnam, the blazing hot desert of Iraq,” Bailey said. “Some died in the United States at places like Pearl Harbor and Gettysburg. Many died alone — some in the muddy trenches during World War I in France, some in a fighter plane crashing to the earth over Nazi Germany. All died brave, and all died heroes.”

Bailey also reminded the crowd to pay homage to the more than 82,000 military personnel missing in action since World War II.

“Though their graves may not be here to remind us of their sacrifice,” Bailey said. “We will never forget them, as well as never stop looking to bring them home.”

Preceding a final song from the Niles High School band students and playing of the taps, Bailey asked people to keep veterans’ sacrifices in mind year-round.

“Remember our fallen military personnel every day of the year,” Bailey said, “not just on Memorial Day.”