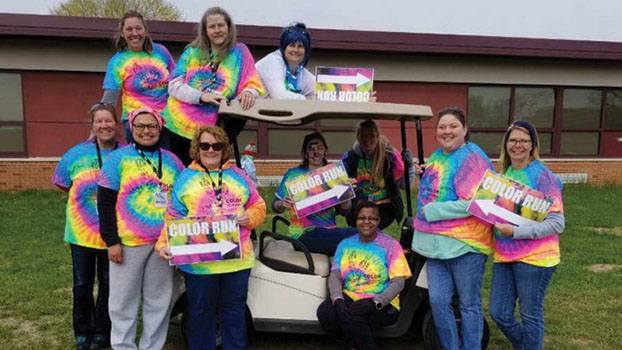 NILES — Nearly 85 years ago, a group of women banded together to form a nonprofit organization to help better the lives of local children and their families.

Since then, league members have continued to work with area schools to provide winter wear to children in need, adopted families at Christmas and continued to be a presence in their community.

Next month, the women’s organization will commemorate each of those accomplishments with an anniversary celebration. League members are inviting the public to take part and learn about being a member so that the organization can continue its mission for years to come.

The Niles Service League’s 85th anniversary luncheon will take place from noon to 2 p.m. Saturday, June 8, at the Grand LV, 104 N. Third St. in Niles. The lunch is free and open to the public to attend.

Tara Velez, the recording secretary for the Niles Service League, said the lunch will serve as a way to celebrate and hopefully get people involved.

“I would encourage people to attend and see what the Niles Service League is all about,” Velez said.

The Niles Service League works with Brandywine, Buchanan and Niles school districts to help local children. They have provided coats, awarded scholarships and camperships and been a go-to for the districts and families when aid is needed.

Velez emphasized that more members are necessary to keep the organization going. She said the Niles Service League has about 10 members and needs more to help distribute tasks and extend their outreach.

“We are in dire need of members,” Velez said. “We are hoping people will come out to the luncheon and decide they would like to be part of the league. It is in jeopardy of disbanding if we are not able to continue to get members that are able to service the community.”

Volunteering as a member Velez described as a rewarding experience.

“I joined the league for what it has to offer and what they do,” she said.

Looking back on this year alone, Velez said the organization had accomplished several projects, including initiating a Niles Babysitting Clinic at the Niles Lakeland hospital, where babysitters could learn children caregiving techniques. They also helped to host the annual Color Fun Run and the Apple Festival youth fair games.

Velez said she got involved in the Niles Service League through a co-worker. She said she was encouraged to join because the nonprofit had awarded camperships to her children.

“I wanted to give back,” Velez said. “Once I got involved, I really did like being involved.”

The Niles Service League meets once a month, September through June.

“[The ornament] has the letters of the Niles Service League. It has coats and scholarships being represented, it has boxes of color to recognize our Color Run. It has a masquerade mask to represent our Kiddos and Company Dance,” Velez said. “Then there is also a present on it to represent shopping for families.”

With the opportunity to celebrate a milestone and help the Niles Service League continue their efforts, Velez encouraged people to take part in the luncheon.