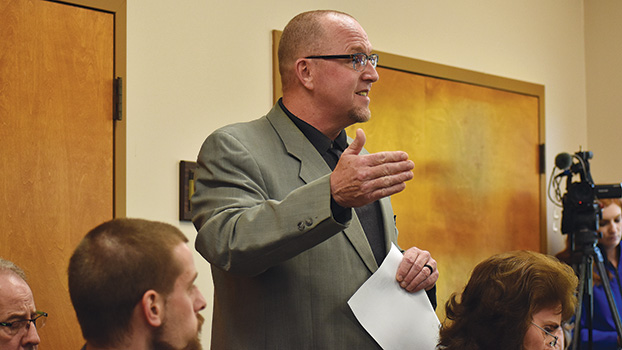 The vote came after a second public hearing at the Niles Charter Township Hall, 320 Bell Road.

While the ordinance opted out of the recreational industry, it sparked the possibility of a future board discussion on medical and recreational marijuana.

More than 20 residents attended the meeting. Several spoke out and asked the township to reconsider opting out of recreational. Others asked for the trustees to revisit their opt-out ordinance of medical marijuana, which township leaders voted on in December 2017.

“We need medical facilities before we need recreational,” said Becky Walters, of Niles Township. “I have been a medical patient for 11 years. That’s why I’m here. We need to have medical first. I’m all for recreational if people want to do it. We voted it in. But as a patient, I have nothing to gain from recreational, except the mere convenience of driving down the street to purchase it.”

Dan Estes, of Niles Township, said the township could be missing out on economic development by opting out of marijuana industry. Estes said he had recently moved to Michigan and was influenced by the legalization of marijuana.

“I know that there are fears, but I think there is a lot to gain,” Estes said. “I think it will be positive. I think it will bring in more than just fast food down 11th Street. It will be a wheel that will help bring this town back into modern day.”

During the first public hearing on the ordinance to opt out, trustees said their decision was influenced by a lack of state laws, which have yet to be finalized.

Sandra Hawkins, of Niles, said she works in the township at Life Action Ministries. Hawkins said she felt township trustees were taking a wise approach in waiting until state regulations are available.

“I understand that you would rather wait until you know,” Hawkins said.

Leading up to the trustees’ discussion of the opt-out ordinance, Rob Thall, the township attorney, gave a presentation titled Municipal Response to and Regulation of Marihuana. In the slideshow, Thall emphasized that the municipalities must choose to opt out of the recreational marijuana industry before the state starts issuing licenses. If they opt out, the ordinance could be repealed at any time. Thall said he saw more than 350 communities listed as opted out on the Licensing and Regulatory Affairs website.

“A lot of the communities I have talked to are opting out on the basis that they don’t know what the regulations are,” Thall said. “They are opting out now to wait and see. You can always change your mind and get involved.”

Thall said he expects local regulations for recreational marijuana facilities to be released by LARA in early June, with the possibility of recreational licenses being issued in September.

Trustee thanked residents for attending and sharing their feedback.

Treasurer Jim Ringler said he wondered how much need for medical marijuana there was in the township community, especially since facilities would be opening in nearby communities.

“I think it would be silly to opt-in to recreational but say, ‘we are not going to do anything with the medical,’” he said. “I have a whole lot more justification for medical issues.”

Ringler also emphasized that there are administrative costs and manpower needed to process a marijuana business’ application at the local level.

“This elected board out here is all part-time people,” Ringler said. “We have no manager. It’s just a different scenario what staff we could even put in to administer all this. There’s a reason why we have taken our time.”

Trustee Terry Eull said he felt it would be premature to opt-in to recreational. However, he encouraged trustees to initiate another marijuana discussion.

“I think we owe it to the people of Niles Township to start looking at opting into medical marijuana or permanently opting out,” Eull said.

Supervisor Jim Stover agreed and said it was time to put the discussion on marijuana “to bed.”

“Can we set a date on this category in the not too distant future?” Stover said. “We haven’t done anything about it. When are we going to set a target date?”

After the meeting, Stover said he hopes to bring medical and recreational marijuana up for more discussion within the next two months.

Following trustees’ vote to opt out, one man said trustees had just voted against the people’s wishes, while others spoke and expressed faith in the township.

“For you to take the action to opt out, it directly goes against the vote of the people,” said one resident, who identified himself as William.

Co-owner of Lush Garden Supply Center, Matt Johnson, who has advocated at the prior public hearing for the township to opt-in to adult-use marijuana, also addressed the crowd.

“I know that there are a lot of people who are enthusiastic about seeing this come to fruition and having recreational in the community and some against it,” Johnson said. “Those that are for it that are seeing the township opt out … they are following the advice of their attorney. These are our elected officials, so let’s give them time.”