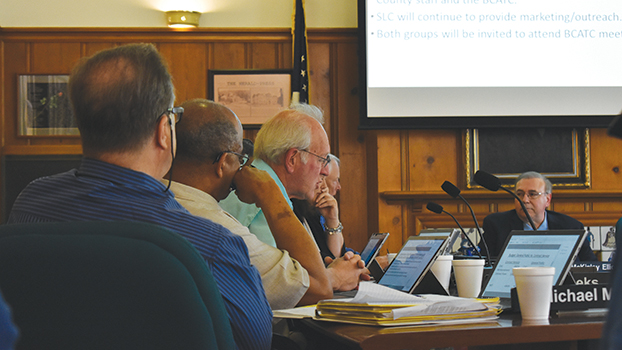 Berrien County Commissioners discussed the proposal during a meeting Thursday morning at the Berrien County Administration Office in St. Joseph.

For the past decade, the county has been searching for answers to fix the transit system, which has caused frustration from riders because of its limited hours and limited service area. Some of the biggest hurdles to improving the system and addressing these problems have been a lack of funding and zero communication between four separate transportation entities.

On Thursday, Evan Smith, the transportation and planning coordinator for Berrien County, provided details on a proposed pilot program that would seek to expand the services of one of the county’s bus systems, the Berrien Bus.

The idea of the pilot program is to use the Berrien Bus, which currently has minimal public service, to provide an assortment of flex routes — a traditional bus route that can deviate to pick up riders from a requested location. The routes would go from Benton Harbor to Niles, Benton Harbor to New Buffalo, New Buffalo to Niles and Coloma/Watervliet to Benton Harbor. A demand response service would be provided on alternating days. Other bus systems in the county, such as the Niles Dial-A-Ride would continue to operate as is.

Berrien Bus operates 21 buses. Fare rates for the buses would stay the same under the proposed pilot program.

The program would cost about $200,000 in local funding. The county would contribute $100,000 a year from the general fund to the program and a matching amount from the Berrien Bus fund balance.

“With a contribution of funding, we can offer a higher level of service, which we’re hoping will bring new levels of service to the rural parts of the county that have not seen a high level of service historically,” Smith said. “Any time you provide a transportation service, there has to be some source of local funding.”

A Berrien County Advisory Transportation Team would oversee the program, made up of commissioners and leaders across the county. The committee would meet regularly to evaluate the program.

Smith is the former operator of the Niles Dial-A-Ride and said he believes Niles residents could benefit from the pilot.

“I think from the Niles perspective, it’s really about connecting the folks in south county to the rest of the county,” Smith said.

But some Berrien County residents who spoke during the public comment portion of the meeting did not agree. One asked who would pick up the tab once the pilot program has ended. Some commissioners also questioned why the program was two years and whether it would put county leaders in a position to pay another $100,000, even if the program was unsuccessful the first year.

Smith acknowledged that the proposal is not a permanent solution to Berrien County’s transportation ailments, but said it could provide valuable insight to those looking to fix the bus system for good.

The pilot program is not the only plan county officials have considered. A proposal from a group called Connect Berrien advocated for the consolidation of the county’s four bus systems. The plan, however, was estimated to cost an additional $1.5 million to implement annually. A county-wide millage was proposed to be added to the ballot to support the cost.

“We reviewed all those options,” Smith said. “It just didn’t seem like there was enough support right now for consolidation for moving ahead, right now with putting a county-wide millage on the ballot.”

If the pilot program proposal is approved, it would be enacted Jan. 1, 2020 and run through December of 2021.

After the discussion, commissioners decided that they want to share the pilot program idea with other county leaders. They will meet to discuss the program again next week and could make a vote on the issue.

“Doing nothing is not an option,” Curran said. “This is a first step. I think there would be a lot of things we would work through and [there are] a lot of unanswered questions at this point. But as we work through this process, I think those questions would be answered.”