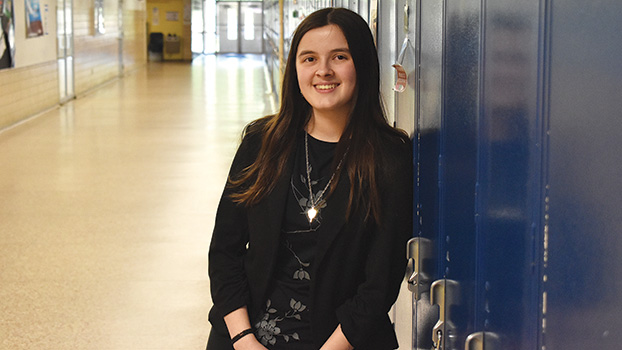 Brenna Williams stands in the hallway at Niles High School. Williams, 18, is legally blind and has excelled in school, earning a place as her class salutatorian. After graduation, Williams will head to Ann Arbor to continue her education at the University of Michigan. (Leader photo/KELSEY HAMMON)

NILES — Brenna Williams was 11 years old when she got some life-changing news during a routine eye checkup.

Williams found out that day that she had a rare genetic disease called Stargardt — a juvenile form of macular degeneration that would leave her legally blind. Her optometrist told her there would be some things she would likely never be able to do, like drive a car. Her mom burst into tears, but Williams just felt determined.

“I did not struggle with it too terribly,” Williams said. “It seemed to affect my family a bit more than me. I was just kind of like, ‘ok, well people are blind, and they figure things out.’”

Seeing the high schooler in passing, one is likely not even to notice she has a visual impairment. A short conversation with Williams, 18, reveals that the Niles High School senior’s eye condition is the least extraordinary thing about her.

Though it means the teen faced some unique challenges, Williams found that accepting her condition was the best remedy. With this mindset, she has persevered across many fronts.

Top of the class

While graduation is on the horizon, by Wednesday afternoon Williams was only thinking of the finals ahead. In addition to her courses at Niles High School, Williams also studies at the Berrien County Math and Science Center at Andrews University, which means she has been preparing for tests in calculus and biochemistry alongside regular testing material.

Williams’ hard work in her four years of high school has not gone unnoticed. In April, she was recognized as the salutatorian of her graduating class, after earning a GPA of 4.2695.

“I’ve always worked hard and tried to do my best, but being top of the class has never been my goal,” Williams said.

After graduation, Williams will continue her education at the University of Michigan, where she will study astrophysics in the Literature, Science and the Arts Honors Program. However, with a passion for a number of other educational pursuits including writing, psychology and working with children, Williams said she is not set on any one career path just yet.

Learning with a visual impairment

Williams said she started wearing glasses in the first grade.

“That was fine. I actually had wanted glasses,” Williams said. “Then, after a while, I was like, ‘this is annoying.’”

Eventually, Williams said glasses did not help her vision anymore, so she shed the cumbersome frames and moved on with life.

There were times in class when Williams noticed the front board was difficult to see. It was then, she said she had to learn to speak up when things got out of focus.

“I’ve always been kind of a quiet kid and reserved,” Williams said. “I never wanted to bother anybody, so it took an assertiveness.”

When discussing what she sees, Williams describes a perpetual blind spot. She equates it to the blur a person experiences after looking into a bright light. Still, she said she has tuned out the blind spot and learned to focus on what she can see.

“I think it’s made me a bit more meticulous,” Williams said. “If you can’t see the details, you get a bit more paranoid about them, so I am a real double-checker.”

While it might have been easy to fall behind in school, Williams never let her vision impact her love for learning. To help, Williams uses magnification devices and the camera on an iPad to enlarge the front board and other classroom material.

In the hallway, she said she sometimes has difficulty distinguishing faces.

“That’s always annoying,” Williams said. “Sometimes someone will say ‘hi’ to me in the hallway, and it’s like, yeah I didn’t catch that voice. I have no idea who just said that.”

In school, Williams found a love for learning, particularly science.

“I guess I have just always been a sciencey kid,” Williams said. “I was like that kid that was like, ‘yeah, let’s play with the daddy long leg.’”

She recalls that passion being solidified when she first “Wrinkle in Time” by Madeleine L’Engle. She said she connected with a father character in the story who was an astrophysicist.

Outside of the classroom, she has been involved in Art Club, Jazz Club, National Honor Society, Science Olympiad and WORD Club. She also served as a volunteer at Hope Community Church’s Awanas Clubs, NHS’ study table and the Niles District Library.

Throughout her time in school, she said mobility and visual aids had helped her in the classroom. She also credits her peers, family and friends for showing her support.

“When I was in Kalamazoo for a blind training center thing, I was sad to hear that almost everybody there was bullied at their school for their vision,” Williams said. “Whereas here [Niles High School], I have never [experienced] any bullying. If anyone has a mean tone with me, it’s so funny because they will step in and say, ‘don’t mess with Brenna.’”

In an English class earlier this year, Williams came across a speech that made her think about her life and encouraged her to provide advice to others, no matter what challenges they face.

“Accepting that this is your new normal and to not have it be something that changes your life,” Williams said. “Accept it and know that you will figure something out.”