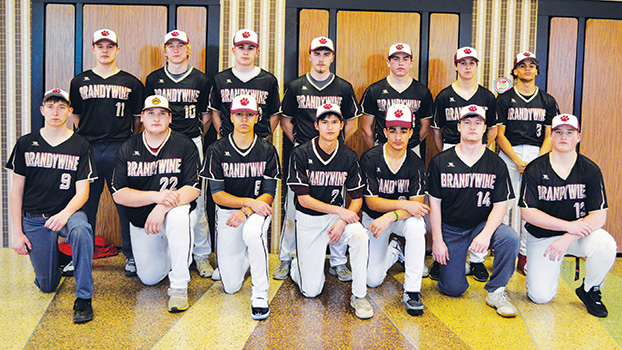 “I feel very honored to be the coach of the Brandywine team to get the programs 900th win,” said veteran coach David Sidenbender. “It goes to show the talent and hard work Brandywine has had over a long period of time in baseball. I am the seventh coach all-time in Brandywine history dating back to our first season in 1962. And to be a part of something like this is very special.”

Sidenbender’s Bobcats have won 366 of those games.

Chuck Hurdle is the all-time leader in victories with 461. Hurdle coached Brandywine from 1971 until he retired in 2000.

Brandywine used a four-run third inning to win the opening game, while it scored three runs in the first and four more in the second to take the nightcap.

In the first game, Ty Mickiewicz picked up the victory with Cam Barrier earning the save by pitching the seventh inning.

Brandywine had eight hits in the contest, including doubles by Barrier and Mickiewicz.

In the nightcap, Barrier earned the victory with Brock Prenkert picking up the save after coming on in relief in the third innings.

The Bobcats (4-0) had nine hits, including a double by Prenkert.

The game stopped after five innings due to darkness.

“I thought we played pretty good defense and threw strikes for the most part,” Sidenbender said. “Did some good situational hitting as well. Ty Mickiewicz had a real good day overall.”

Visiting Niles only managed four hits in a 10-0 loss to Mishawaka Marian Tuesday.

The Vikings (0-2) allowed 10 hits to the Knights, including doubles by Mike Gibson and Jordan Tirotta.

Cole Simpson took the loss for Niles. Kade Wagley and Jadon Hainey also took the hill for the Vikings, who were scheduled to return to action Thursday as they headed to Battle Creek Lakeview for a SMAC non-divisional doubleheader.

Those games were postponed.

BUCHANAN — Defending state champion Coloma earned a sweep of host Buchanan Tuesday, but it was anything but easy for the... read more