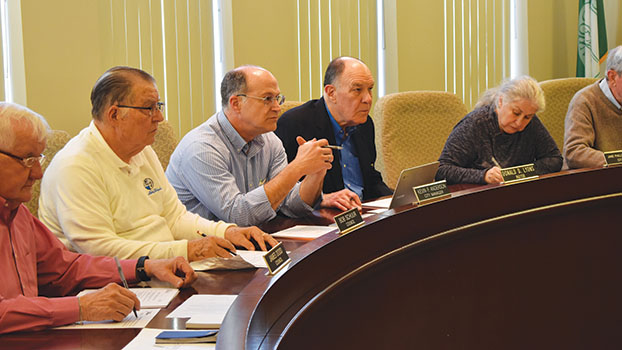 DOWAGIAC — The seats in the Dowagiac City Council chamber were mostly vacant Monday evening at the regular meeting of the council. By the look of the agenda, the meeting would be relatively short, as it turned out to be.

After brief public comment, Mayor Donald D. Lyons made a proclamation for the council and for the City of Dowagiac.

In his deep and clear voice, Lyons spoke not only about the history of Arbor Day in the country, but about the value of trees within the Dowagiac community and the world. As Arbor Day is observed throughout the world, Lyons’ proclamation made the observance of Arbor Day official in Dowagiac.

“Whereas in 1872, Julius Sterling Morton proposed to the Nebraska Board of Agriculture a special day be set aside for the planting of trees; and whereas this holiday called Arbor Day was first observed with the planting of more than a million trees in Nebraska; and whereas Arbor Day is now observed throughout the world,” Lyons said.

As he continued, Lyons spoke to the inherent need of trees for the environment and for the health and well-being of people.

“And whereas trees reduce the erosion of our precious top soil by wind and water, cut heating and cooling costs, moderate the temperature, clean the air, produce life-giving oxygen, and provide habitat for wildlife; and whereas trees are a renewable resource, giving us paper, wood for our homes, fuel for our fires, and beautify our community; and whereas trees in our city increase property values and enhance economic vitality of business areas; and whereas trees wherever they are planted are a source of joy and renewal,” he said.

“And whereas the city of Dowagiac’s Arbor Day originated through the efforts of Mr. Edwin Darr and is celebrated through various festivities and the annual tree planting, and in 2007 Dowagiac received the honor of recognition from the national Arbor Day Foundation as Dogwood Tree City U.S.A.; and whereas the city has been annually designated as a Tree City U.S.A.; and whereas the city has forged a commitment to managing our urban forest, now therefore I, Donald D. Lyons, Mayor of the City of Dowagiac, do herby proclaim the last Friday in April as Arbor Day in the City of Dowagiac from this day forward, and I urge all citizens to celebrate Arbor Day and to support efforts to protect our trees and woodlands, and further I urge all citizens to plant and foster trees to promote the wellbeing of this and future generations.”

As noted in the proclamation, Dowagiac has observed various tree related activities and received recognition for its efforts to protect and foster tree growth. Community tree efforts in Dowagiac do not start and stop with plantings, awards and observances, however.

Another effort announced at the Monday evening meeting is the annual tree sale put on by the Town and Country Garden Club from 9 a.m. to noon on Saturday, May 18 at Commercial Street Commons, across from the library. A representative from the Town and Country Garden Club reminded the council of the tree sale, shortly after Mayor Lyons’ proclamation.