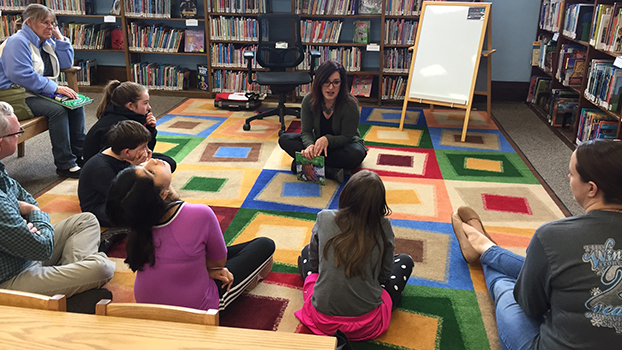 Deanna Scelzo shares her new book, “A Child’s Life in Trees,” with visitors at the Dowagiac District Library. Her new book recounts some of her childhood experiences of playing in trees on her family farm. (Submitted photo)

DOWAGIAC — Children and young people are commonly chastised for spending too much time on their phones, tablets, computers and video games. Deanna Scelzo is one local author who has taken on the task of combatting what she sees as “mental laziness” in youth by writing books about simpler times and directly engaging the imaginations of children.

On Tuesday afternoon, Scelzo visited the Dowagiac District Library to read her new book and share in the process of using imagination through illustration.

Scelzo has authored three books, “Teacher Confessions: Winter in my Hood,” “Teacher Confessions: Chillin in the Barn,” and her latest book, “A Child’s Life in Trees,” which she read to visitors Tuesday. Her first two books followed similar themes and layouts, while her recent book stands independently, and contains less text and emphasizes the illustrations.

During the Tuesday event, Scelzo not only read her latest book, but also brought the illustrator of her books and former Kincheloe Elementary principal Dan Smith to give a presentation about his process of illustration. During his presentation, Smith also invited visitors to try making their own illustrations, using youth services coordinator of DDL Melissa Phillips as a model.

“Deanna read her book and participants got involved because she stopped at each page and asked why they thought she wrote what she wrote and what she meant,” Phillips said. “They started seeing things that weren’t obvious when they first started. She would ask, ‘What else do you see?’ She kept pulling it out of them.”

Phillips believes it is important for libraries to host local authors, especially for youth events.

“I think it’s important because when it is a local person, kids around here can see, ‘Someone around here did this. I can too,’” Phillips said. “Deanna’s point is ‘everyone has a story.’ If you just listen to other people, you can come up with other stories.”

Scelzo, formerly a middle school teacher in South Bend, found her interest in writing books during her teaching years. She found that many of her students were below an age-appropriate reading level, had a general lack of creative or imaginative capabilities and were more interested in having entertainment handed to them than making their own entertainment.

What Scelzo also found, however, was her students enjoyed hearing her stories of growing up on a 90-acre farm and creating adventures almost as much as she enjoyed sharing them. Her students’ disconnection with their imaginations and simultaneous enjoyment of her childhood stories became the inspiration for her first two books.

“That’s how I got started writing; just telling them stories about how I grew up,” Scelzo said.

Scelzo’s students were not just an inspiration for her books. She wrote them specifically for her students by creating easy-to-read texts and pairing them with Smith’s guided illustrations. For Scelzo, the message of her books is a double-edged sword communicating there are other ways to be entertained aside from staring at a screen, both by reading and by getting out into the world.

“I enjoy telling stories from my childhood,” Scelzo said. “Life was simpler when kids were getting to appreciate using their imaginations without electronics. Kids are so electronically driven to be entertained [now]. I like writing about when things were simpler. I like telling kids the great thing about imagination is it doesn’t have to be charged.”

Scelzo hopes her books and author events encourage youth to share their stories and achieve their goals.

“I enjoy letting kids know if I can do this, anyone can do it. Everyone has a story to tell,” she said.

More information about Deanne Scelzo can be found on her website, deannascelzo.com, where there are links to her social media. Her books can be purchased through Amazon and Barnes & Noble’s.