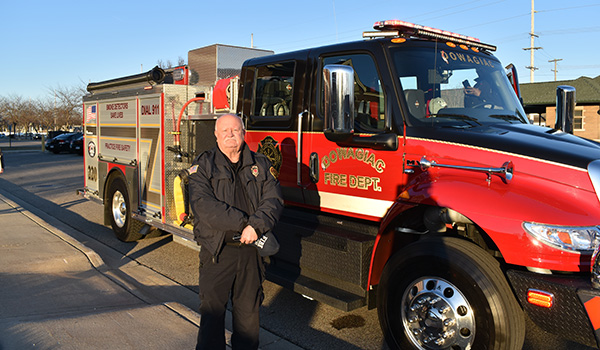 Council members offered a few comments and community insights and heard from one concerned community member during public comments.

The meeting started with an inquiry from councilman Patrick Bakeman about the progress of upcoming community development projects. Although city manager Kevin Anderson did not have a finely detailed list of every project in the community, he gave an overview of what the city will be working on in 2019 as the weather gets warmer.

Anderson pointed to a number of projects in the first few minutes of the meeting. He touched on the repaving of M-51 and M-62, which will be repaved by the state, but noted the city will work in coordination with that project to make water system improvements on Division Street. Anderson also highlighted projects being done at the wastewater treatment plant to address rags and other disposable items that are clogging the system.

Other ongoing projects Anderson briefly covered at the meeting included the Cass Avenue Park, 70 percent of the cost for which will be covered by a grant program through the Michigan Natural Resource Trust Fund; the property acquisition and demolition of buildings on the block surrounded by Main Street, Front Street, Pennsylvania Avenue and High Street; the demolition of the building on the corner of Front Street and Beeson Street where Art Enuh Suit gallery and clothing store resides; and projects in coordination with Dowagiac Union Schools to create more shared public parking around Chris Taylor Alumni Field.

After the council heard from the city manager about some of the ongoing and upcoming projects, the council passed the resolution to authorize the adoption of the Cass County Hazard Mitigation Plan that places Cass County and Dowagiac in compliance with updates to FEMA regulations. The council also voted to approve the payment of bills.

During public comments, Bill Lorenz asked the council about the “paradox” of businesses in town trying to fill employment vacancies and the apparent high unemployment in Dowagiac.

“We’re trying to figure that out too,” Anderson said in response to Lorenz’s original question.

Lorenz asked if there were hiring and job matching opportunities the city could work with to decrease unemployment. Mayor Donald Lyons responded with a more hardline philosophy of personal responsibility by pointing to the job openings and opportunities that exist at his own company, Lyons Industries.

“I have all sorts of jobs,” Lyons said. “If a person doesn’t want to come to work in the morning, that’s nothing I can do with.”

“I understand,” Lorenz said. “I have this wishful thinking that says, ‘Somehow we need to figure out how to make jobs and people fit together.’ I don’t have a solution.”

After the meeting adjourned at 7:30, council and audience members were encouraged to step outside and see the new fire truck purchased by the Dowagiac Fire Department. According to deputy fire chief Robert Smith, the truck cost $340,000 and the department purchased an additional $15,000 worth of equipment.