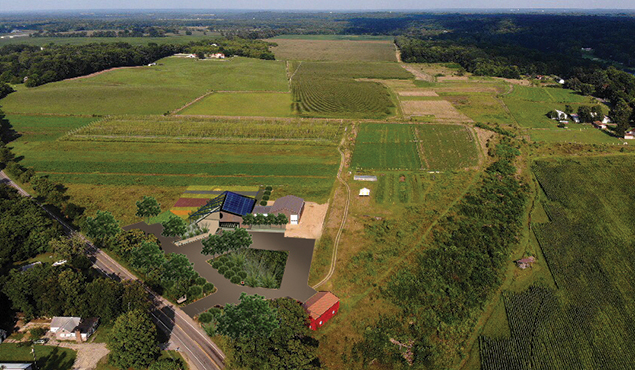 BUCHANAN — A brand-new Buchanan brewery that has been four years in the making is slated to break ground this month.

CEO Brian Dougherty said the projected date to begin construction on the River St. Joe Hopyard Brewery is March 18. If all goes according to plan, the farmstead brewery could be open for business by mid to late-summer.

Dougherty has partnered with farm owner Fran Tuite and co-owner Matt Gies to bring a “grain to glass”-style brewery to Buchanan. The business will be located on Tuite’s 180-acre organic farm, 15475 Walton Road in Buchanan Township.

The vision for the brewery is to not only provide beverages but connect people with the land where the beer was grown and processed.

The farm will grow hops and barley to create a variety of farmstead beers — small batch brews, produced with local ingredients.

Dougherty said the business hopes to feature a variety of brews.

Similar to the wine trail that entices people from all over the country to relax in southwest Michigan vineyards, Dougherty and his partners in the business believe showing people the roots of a product can draw people in and share an important story.

“Most breweries, unlike wineries, pick up the story in the brewhouse,” Dougherty said. “There is a lot be told, especially in this area. Telling the story from the farm’s perspective, starting there is what inspired us. There is so much to be told about beer and farm products.”

Dougherty hopes the chance to see the entire process of cultivating beer, will give them a new sense of appreciation for agriculture — or at least the scenery in the area. The 5,500-square-foot brewery will feature glass wall paneling on the northeast side, ideal for taking in the sights of the farm’s rolling green land.

Reclaimed wood that was felled on the farm years earlier will likely be used to create the bar stools, flight panels and serving trays.

The business is in the process of finalizing a construction permit with Buchanan Township trustees. A construction firm, South Bend-based Holiday Construction Group, has been selected to build the tap house.

“That’s where the hops will come in off the bines — not vines,” Dougherty said. “They are cut down off the hop trellis and fed through a machine, called a harvester.

“We hope for other guests, sitting in the shadow of the hops that effectively grew your beer will be pretty interesting. I think getting people out on the land and appreciating the process and difficulty, frankly, of farming will help build loyalty.”

The brewery is phase one of River St. Joe. Dougherty said a restaurant and event space are also being planned. Those aspects of the business are projected to be available in 2020 or 2021.

“We really want this to be an event space, a place where people can hang out and learn about farming and organic processes and beer making,” Dougherty said. “We just have this really unique situation … where everything in the beer-making process is happening on site.”

Sticking to their homegrown efforts, Dougherty said the business also hopes to grow food to use in the restaurant.

To help with the business, Dougherty, who has a background in law and education, has been alternating his time between Buchanan and Chicago where his wife and children reside. Dougherty said he got connected with the project through Tuite, who is a longtime friend of his family.

Dougherty said he looks forward to moving the brewery project forward and sharing the views of the farm with customers.

“That’s what really distinguishes us is the open space,” Dougherty said.  “It’s time to get started.”