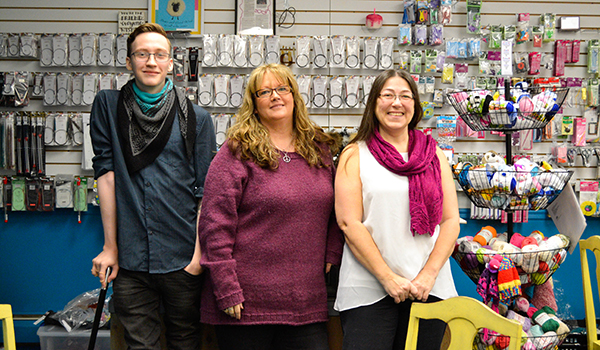 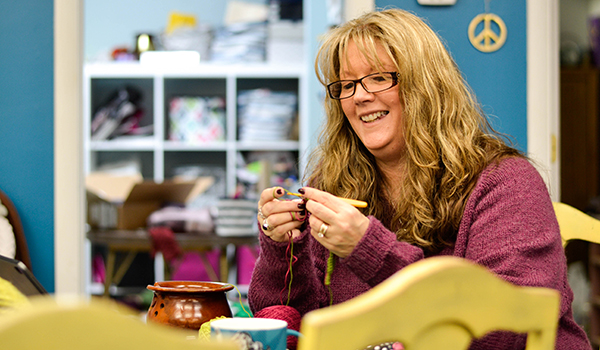 There is an unmistakable sense of warmth that envelops customers of Dowagiac’s Yarn on Front as soon as they walk through the glass door up front.

Wooden shelves chock full of fuzzy, fluffy bundles of string — an array of shades, ranging from brilliant ruby to calming lavender — immediately draw the eye. Hanging throughout the shop are neatly-woven scarfs, hats, mittens, even tiny baby booties, which are equal parts protective clothing and works of handmade art.

Surrounded by such comfortable-looking items, the shop’s visitors will want to grasp one of the bundles of yarn or pieces of apparel with their own hands, to feel the tiny fibers rub gently between their fingers. Thankfully, customers are free to give in to their temptation — the store’s wares are free to touch, after all.

What keeps Yarn of Front’s dedicated fellowship of the string coming back to the downtown shop time and time again is not fuzzy feelings generated by feeling the store’s fuzzy inventory, though.

It is the sense of belonging and comradery that hits them as soon as owner June Nemeth hears the chimes on the door ring, pops her eyes up from whatever mass of yarn she is patiently working on at the moment and gently greets the familiar face making their way inside by name.

“For me, it’s not about selling yarn and making money,” Nemeth said about her shop, while taking a brief respite from the bundle of spruce green and rosy red yarn she was working on at the time, a metal crochet hook still nestled tightly between her left thumb and index finger. “It’s about doing something for my community. It’s about bringing people together.”

Surrounding Nemeth at the small table near the back of the shop were her partners in yarn, employees Kelli Mullin and David Hollister.

All three were busy working on their respective projects at the time — Nemeth’s was a scarf inspired by the late Carrie Fisher and her immortal “Star Wars” character, Princess Leia. Each wore trophies of a previous project they conquered — scarves, in Mullin’s and Hollister’s cases, and a purple sweater, in Nemeth’s.

Popping in and out throughout the early afternoon were customers stopping in to find another colorful yarn for their own work-in-progress, who would inevitably take a seat at the table or one of the rocking chairs surrounding it themselves, taking out some needles to quietly work on their own creations.

If the scene that February afternoon was any indication, Nemeth and her shop are indeed bringing people together, knitted together by a common passion.

For the love of yarn

Yarn on Front’s development into a destination for yarn lovers is quite an achievement for Nemeth, who did not know anyone else who was into the hobby before she opened the shop in late 2016, she said.

The Sister Lakes resident has been in love with the world of yarning since she was a teenager. She first learned how to knit at 16 years old when living in Australia, picking up the craft from a woman she was doing some babysitting for then, Nemeth said.

“Being a lefty, there [were] some challenges, but we worked it all out,” she said, chuckling softly at the memory.

Nemeth would later learn knitting’s counterpart, crocheting, which, among other differences between the two techniques, requires only a single hook instead of a pair of needles.

Though Nemeth put down her needles for about 10 years after starting grad school, she later picked up the hobby again after coming across her craft box during a particularly hectic time in her life, she said.

“There’s something about knitting and being able to let your mind finally rest,” Nemeth said, after gazing up once again from her crocheting. “You gain some perspective. It’s very calming. It’s a good way to deal with anxiety. I’m ADD, and this is about the only thing I can stay focused on for any length of time — granted, I’m always bouncing around between 50 different projects.”

In 2014, Nemeth found herself at a crossroads in life, trying to decide if she wanted to continue her career as a rehabilitation counselor or head down a different path. At the same time, the yarn shop she had frequented in St. Joseph had just closed its doors, while a small clothing store in downtown Dowagiac had moved out of its storefront beneath the local Masonic Lodge.

It was then an epiphany struck Nemeth, she said.

“I said, ‘that’s what I need to do. I need to open a yarn shop, right there [in Dowagiac],” Nemeth said. “That’s when the idea formed. It took two years, but two years later, I was opened.”

Opening on Small Business Saturday in 2016, Yarn on Front quickly became a destination for yarn lovers across the Michiana area, with customers traveling from as far La Porte, Indiana andVicksburg, Michigan, to browse the assortment of yarn, to develop their skills in one of the shop’s workshops or to participate in the weekly yarning night, where customers gather to work on their projects together.

To keep up with the growth, Nemeth asked Hollister — a regular at the shop who also volunteers with a knitting group at the Niles Library — if he was interested in working for her six months after opening. Hollister learned knitting during an afterschool workshop at his high school library, wanting to pass the time while waiting for his mother to pick him up, he said.

Like Nemeth, yarn has helped the Niles resident cope with adversity in his life, including issues with depression and anxiety, he said.

“This is something I can do, and I enjoy doing,” Hollister said. “I feel like I’m contributing in some way by sharing what I have, rather than just sitting at home, rotting. … I feel good about myself when I help someone find something they like doing.”

Mullin is a recent addition to the Yarn on Front family, coming on board in October. Mullin was also a regular before Nemeth hired her, first hearing about the store while looking for sock yarn from the Facebook page of a local yarning group she had joined, she said.

Mullin learned both knitting and crocheting, though in the opposite order of Nemeth, picking up the latter from her older sister in 1977 and teaching herself the former in 1982, she said.

The trio’s combined knowledge of yarn comes in handy when assisting the variety of customers who stop by Yarn on Front, from the newbie looking to find a new hobby to the veteran who needs to stock up for their next fiber creation.

There is no shortage of yarn for either type of customers to choose from. Nemeth stocks yarn from 36 different vendors, made from natural fibers such as cotton, alpaca fleece and cashmere wool, each with at least 10 different shades.

The shop also sells a variety of different needles, hooks and other tools — as the owner puts it, “everything you need to play with yarn.”

“The hardest part of this is making the decision of what to bring in,” Nemeth said, glancing at a list of her inventory on the iPad behind the front counter. “My fiber heart wants it all!”

“When June asks my opinion on which one of these [new yarns] we should bring in, I ask ‘am I appealing to business you or knitter you?’” Hollister added with a laugh, while busily working on the project in front of him.

Nemeth and her staff are always hard at work creating samples to display around the store. In addition to decorating the store, the three hope the fuzzy clothing items get the gears turning inside the heads of customers who are looking for a new project to tackle.

“You put a crafter in a comfortable environment, surrounded by yarn, they’ll take some of it home,” Hollister said with a grin.

But what motivates Nemeth and the rest of the Yarn on Front team is not the chance to sell fancy fibers, but to pass on their knowledge of knitting and crocheting to others and to build a home for the yarning community.

Every month, Nemeth and her team teach a series of workshops that show participants how to create a particular piece of clothing, such as a scarf or poncho, while at the same time helping students learn new skills, such as color work or mosaic knitting, Nemeth said. They also offer one-on-one instruction for beginners, intended to show them the basics before they can start participating in group classes.

At the same time, the weekly yarning nights — which take place on Wednesdays — have continued to grow in size since Yarn on Front’s opening. Some nights as many as 20 crafters have come to work on their projects, share some pointers on how to improve their work and share plenty of pleasant conversation and laughs.

Naturally, many friendships have been formed inside the small downtown yarn shop, which has created a strong community around it, Nemeth said. In fact, the staff and a group of regulars plan to take a three-day retreat to Holland to work on their projects together.

For Nemeth, the best part of the job is introducing new people to yarn and witnessing their growth, she said. The store owner can rapidly rattle off the names of her customers, which projects they have recently finished and how great it was to see them come out of their shells or discover confidence they never knew they had.

Nemeth beamed as she mentioned one particular example of this back in November, when Yarn on Front participated in the nationwide 10,000 New Knitters day, an event sponsored by yarning company Skacel to encourage new people to learn the craft. In addition to giving away free yarn and needle kits to customers, Nemeth, her staff and a number of regulars who volunteered to help taught nearly 40 novices how to knit that day, which the owner described as an awesome experience.

“We’ve had some [participants] who’ve continued to come back,” Nemeth said. “They finished their first project, and they’re all excited and planning the next one. That’s what we do here. It’s about inspiration and bringing them into the craft. It’s not just for your grandma anymore.”