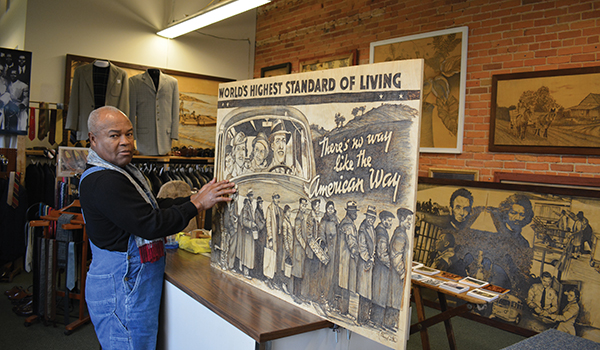 Nearly 40 years ago, not long after having moved back to Dowagiac where he had spent many of his formative years, resident O’Larry Collins stood in a line, allowing his mind to wander as he waited to reach the front.

It was then, in such a seemingly mundane moment, when from the corner of his left eye, he caught sight of a small piece of stucco board that would inform his work for the rest of his life. The board had been burned, its scars forming the shape of a deer.

“I saw that and thought to myself, that is really sharp,” Collins recalled, leaning back in his chair as he smoothed a silk scarf around his neck. “I started picturing it big — bigger than it was. I didn’t even know what wood burning was, but I thought I had to do that.”

Collins, 70, of Dowagiac, is the owner and artist at Art Enuh Suit (named after the southern pronunciation of “Art and a Suit”) located on Front Street in downtown Dowagiac, where he sells his wood burned art and pre-owned men’s clothing.

Though the store is but a small doorway on Front Street, if a visitor were to walk past on the weekend, they would not be unable to miss it, being drawn in by the smooth jazz notes spilling out into the streets.

Once customers enter the building, they will be greeted by Collins, typically sporting 1940s style jacket and hat over a pair of overalls, who is always prepared to share a story or two — though he believes his artwork can do that just fine on its own.

Back to the beginning

The story of how Collins began telling stories through art goes back to his childhood. The artist, who specializes in wood burning, spent his earliest years in Rolling Fork, Mississippi before moving to Dowagiac when he was 9 years old. As an adult, he spent time in Chicago, before settling back in Michigan.

It was when he was in the first or second grade that Collins could recall drawing his first picture. He remembers sitting next to a boy in his class named C.W., and looking over the boy’s shoulder to see him drawing a picture. C.W. shared a piece of paper with Collins, and the rest is history, he said.

“I’ve been doing art all my life, ever since I first saw a kid draw something and I wanted to try it,” Collins said. “I knew I had to do it.”

From there, Collins would spend the majority of his time fostering his love of art. At the former McKinley Elementary School in Dowagiac, Collins said his teacher Mrs. Wright would allow him to draw and teach him about art while other students worked on different projects.

“I think she knew I was an artist before I did,” Collins said.

It would be many years later when, as an adult, he would come across the deer-burned stucco board that changed the course of his career. Collins said that once he saw what wood burning could do, he borrowed his father’s soldering iron to try his hand at the practice.

In his shop, hidden behind stacks of other works, Collins still keeps one of the first pieces he can remember doing — a portrait of American jazz singer Sarah Vaughan.

“[There were] wood burner [tools], but I didn’t know anything about wood burning,” he said. “When I first started, it was really hard. I thought to myself, ‘I can’t do this.’ Then a couple of days later, someone said to me, ‘what do you mean you can’t do it? You can do it. If you want to quit, do it first and then it if you don’t like it, quit. Don’t quit before you finish it.’ I got back on it, and I finished the picture. Then I could say, ‘I did it,’ and then quit or keep going.”

After that, Collins said he no longer doubted his abilities, and in the decades since then, he has told many stories through his wood burnings. His version of the last supper holds a special place in his heart due to his faith as a Jehovah’s Witness. Other pieces depict weathered barns and old friends. His favorite piece is titled “For Who?”

“For Who” depicts a billboard of a smiling white family next to a message declaring “There’s no way like the American way” and that “America has the highest standard of living.” The billboard is juxtaposed amongst the nation’s poorest waiting in line for food. Collins said it is his favorite work, which took him more than six months to complete, because it asks “For Who” America has the highest standard of living.

“It sure isn’t for the people in that soup line. I think that is what moves me to do this kind of work. It makes you feel for those people,” Collins said. “All I can do is express it. That’s why I love art, because I can express that and tell those stories.”

While art may be his first and greatest love, fashion is Collins’ second, saying that clothing can tell the story of a man just as well as any artwork could. The back half of Art Enah Suit is dedicated to men’s thrifted clothing, the pieces echoing back to the jazz era, with sharp suits, silk scarves and trilby hats.

“I’m a clothing fanatic,” Collins said. “I love men’s clothing. It’s getting harder to find. There aren’t many men’s thrift stores, so I wanted to sell some of my own.”

The pieces Collins sells are inspired by his personal style, which is not only heavily inspired by old Hollywood stars such as Cab Calloway and Clark Gable, but also more modern pop culture figures such as Cosmo Kramer from Seinfeld.

In his store, Collins prominently hangs a black and white photo featuring many male members of his family, wearing sharp white suits and structured fedoras.

“I’m a dresser. We are dressers in my family,” he said. “I think it’s another way, when you didn’t graduate from college or get educated or whatever, to try to show who you are, that you fit in the world somewhere. It’s a substitute for so much that you couldn’t do or wasn’t allowed to do. I think that is a lot of it, to dress and feel like you are someone.”

Art and story can be found in everything, from paintings to fashion to music — even cleaning can be an art if it is done with passion, Collins said.

Going into the future, he said he plans to keep that mindset and look at the world with artistry with his art and his clothes. To Collins, the key to making that happen is to never give up on art, the same way he never gave up on learning how to make large wood burnings a reality after he saw that stucco board deer so many years ago.

“An artist, it’s just natural. I couldn’t not make it my career,” he said. “I tried to quit before, but I couldn’t quit. The only way I can quit is to go blind.”

Sitting in front of a monitor in a separate room, Niles resident Matt Herm watched as a group of people... read more