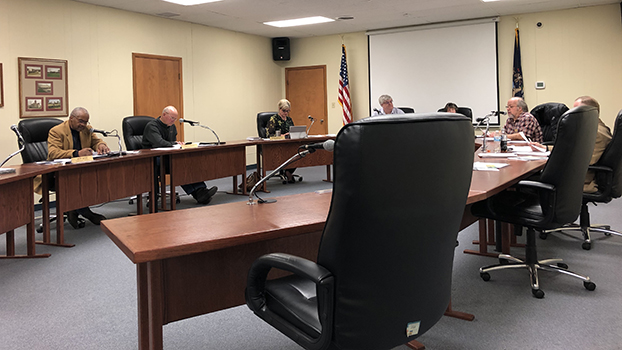 Commissioner Clark Cobb reads off a resolution during Thursday’s meeting of the Cass County Board of Commissioners. (Leader photo/TED YOAKUM)

CASSOPOLIS — An issue that a union official said would have cost the county “zero dollars” to initially resolve is at the center of a dispute between some Cass County leaders and the Cass County Independent Employees Association.

CCIEA President Tina Butler told the Cass County Board of Commissioners during its committee of the whole meeting Thursday in Cassopolis that the union is moving forward in the grievance process against the county after at least two employees with the clerk’s office were denied a lunch break during a partial workday earlier in the month.

The union president approached the board during a public comment period with the complaint after failing to resolve the issue with Cass County Clerk Register Monica McMichael and Administrative Assistant Tara Myer privately, she said.

According to Butler, the complaint was sparked on Feb. 12, when the county offices were closed from 8 a.m. to noon due to the weather — a period during which employees were still paid — with workers reporting to the county offices at noon to work until the end of the business day at 5 p.m. At some point during the day, several employees with the clerk’s office asked to take a break for lunch, a request that was denied — violating the terms of the union’s contract with the county, Butler said.

The union leader pointed to a provision of the CCIEA’s contract, which stipulated that employees must be allowed to take an unpaid hour lunch break, Butler said. There is no language in the contract restricting this right, including for abbreviated work days, the union president added.

“I can’t stress enough here — the issue is one hour of unpaid time,” Butler said. “To honor this would cost the employer zero dollars.”

Butler became aware of the issue several days later, after the employees who requested the lunch break were unable to get a response from their direct supervisor, she said. The union president spoke with McMichael and Myer, who both maintained that the county did owe the employees an unpaid lunch hour that day, Butler said.

“If building trust and raising employee trust is truly, truly the desire of this board and the county leaders, I would contend these types of actions are certainly not a way to accomplish that goal,” Butler said.

McMichael addressed the union’s complaint immediately after Butler concluded her remarks. The clerk defended her position on the matter and criticized the union president for coming to the board and publicly stating the union’s grievance, which McMichael said violates the terms of the CCIEA collective bargaining agreement.

McMichael said none of her employees contacted her on Feb. 12 to ask for a lunch break, with the clerk adding she would have allowed them to leave and get something to eat if asked. She did not know the employees had lodged a complaint until Butler contacted her two days later, McMichael said.

After McMichael said she looks forward to the following the grievance process and will agree to any recommendations that follow from it, she concluded her statement with a challenge to the commissioners.

“Please ask [your constituents] if they agree that tax dollars should have paid employees to sit at home for four hours, arrive to work at noon and then leave again soon after for an hour lunch,” McMichael said. “I would love to hear their thoughts.”