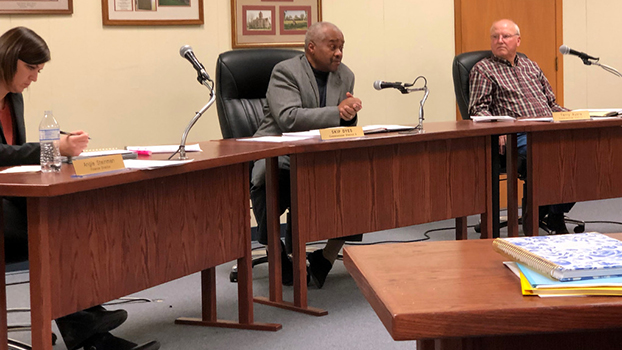 CASSOPOLIS — As Cass County prepares to embark on yet another search for a new leader, some commissioners are asking how the board can finally close the revolving door in the administrator’s office.

The Cass County Board of Commissioners delved into some details of the county’s upcoming hunt for a new county administrator during its committee of the whole meeting Thursday evening in Cassopolis. During the discussion, several commissioners said the board needs to take a good hard look at why history has continued to repeat itself, as administrator after administrator has left the position after only a few years of service to Cass County.

Last month, Karen Folks became the latest county administrator to leave office, resigning during the board’s Jan. 10 board of commissioners meeting after two and half years of service. The board had planned to consider a motion, put forward by District 5 Commissioner Robert Benjamin, to terminate Folks’ contract heading into the January meeting, though the motion was later changed to instead accept her resignation in the committee of the whole.

Folks — who had clashed with several commissioners since taking office in the summer of 2016 — was the fourth administrator to part with Cass County since Terry Proctor resigned from the position in March 2010 after 20 years in the role.

In the weeks since Folks’ departure, county officials have worked on an official job posting for the vacant administrator position, which they discussed further during Thursday’s committee of the whole meeting. Administrative Assistant Tara Myer — who has worked on the language of the proposed posting with Commissioner Vice Chairperson Roseanne Marchetti — presented an updated description to the commissioners that evening and mentioned that she had sent the proposed job posting to a human resources management firm to get some feedback.

“They said it was a very thorough job description,” Myer said. “They were very impressed with the details in there.”

Myer added that the firm did recommend the county tweak the required years of experience, from five years to a range of five to seven years, she said. Marchetti pointed out that the proposed posting asks for prior experience in county-level government as well.

Myer hopes to begin spreading word about the job opening beginning the week of March 4, with plans to advertise the job opening through a number of different venues, including websites like LinkedIn and Indeed and through the Michigan Municipal League, she said. She would like to set a deadline of March 29 for applications, with interviews with leading candidates possibly beginning the week of April 22, if the commissioners choose, Myer added.

During the discussion, District 3 Commissioner Skip Dyes asked if the commissioners should consider getting additional consultation help before jumping head first into the hiring process. Dyes, who has served on the board of commissioners since Proctor’s resignation in 2010, said he did not want to see the county continue to make the same mistakes in terms of hiring.

“I’m not saying we can’t make a good decision, I just want to make sure we have the right criteria, the right things we’re looking for,” Dyes said. “I just don’t want to do this again.”

District 6 Commissioner Michael Grice voiced similar reservations, and added that he did not believe the county should employ a headhunting hiring service to help with the hiring process, as was done when Folks was hired in 2016.

Later in the evening, the members voted to set aside $2,000 worth of funding to advertise the administrator job posting.