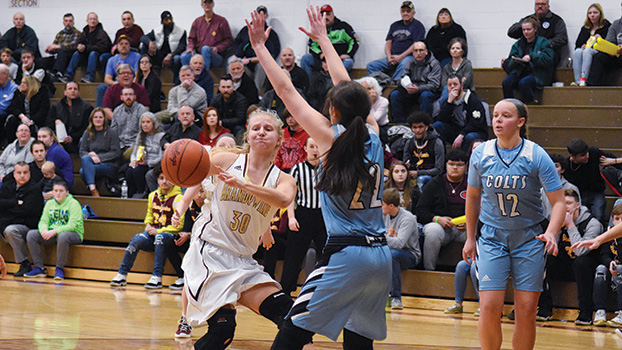 NILES — Any knowledgeable coach will tell you there is more to learn from a loss than a blow-out victory.

Veteran Brandywine coach Josh Hood certainly knows that, so following his 41-35 loss to visiting Comstock in the battle for first-place in the BCS Red Division, he was anything but disappointed.

Hood and his Bobcats were blown out by the Colts 58-31 in their first meeting, a game that he said was not even that close.

But with a new game plan, which Brandywine nearly worked to perfection, the Bobcats were able to keep it close and had a chance to upset Comstock.

“I am going to give a lot of credit to our girls. They played phenomenal,” he said. “You go up there and lose by 27, and it was not even that close. I am proud of these girls,” Hood said. We haven’t been lot in any games closer than 24 (points) all year. We are 13 games in. That is not their fault. That is not our fault. We will play anybody and everybody in this area. There are just a lot of teams in this area that do not want to have anything to do with these Brandywine girls.”

Hood felt that for the first close game of the season, his team handled it well.

“This is a huge learning tool,” he said. “I told them if they are going to play with that kind of heart and that kind of ambition, Brandywine will be holding the torch again in ‘March Madness’ and teams can come watch us. I am really excited for our team. We learned a lot tonight.”

One of the things that the Bobcats learned was that it is the little things that make a huge difference in a close game.

Free throws are some of those little things.

Down 32-31 with five minutes remaining, Brandywine twice missed a chance to tie or take the lead at the free throw line. The Bobcats also let an offensive rebound slip through its hands after a missed free throw that would have given a chance to score.

“The girls are kicking themselves right now because we missed five free throws in the fourth quarter, a couple of one-and-ones,” Hood said. “You cannot do that. Those girls feel bad about that, but like I told the girls was that the same thing happened last year in the regional against Schoolcraft. There were one or two plays where we missed our assignments on (Daisy) Ansel when she got those two looks or those back side rebound when we gave those up. Those are just as important as that second half.”

Despite missing a couple of early assignments on Ansel, who averages more than 30 points per game for the Colts, Brandywine’s Megan Schmidt and Madison Bailey did a tremendous job rotating defensive assignments on her in the box-and-one.

Ansel was held to just 17 points, of which six were free throws down the stretch. She was visibly frustrated in the third quarter by the Brandywine defensive effort.

“Megan and Madison were awesome tonight,” Hood said. “Ansel is a phenomenal player. For 239 games since I have been the coach at here, we have played man-to-man and run-and-jump (defense). We get after people. We have lost to them five times in a row, now six, so we had to change it up. We went with a different game plan and the girls were just phenomenal. I think we did a pretty good job tonight and we frustrated her. Give them credit though, their role players stepped up and hit some big threes.”

The game was close throughout with Comstock leading 12-6 after one and 23-13 at halftime.

A big third-quarter effort by the Bobcats, including scoring the first 10 points of the second half, allowed Brandywine to tie the game at 23-23.

The Colts were able to reclaim the lead and then held on the rest of the way. Comstock hit seven out of eight free throws down the stretch to seal the victory.

Abby House, who had a trio of 3-pointers, finished with nine points for the Colts, who are now 6-0 in the BCS Red Division and 11-3 overall.

Brandywine lost for only the second time this season, both to Comstock. The Bobcats are 12-2 overall and 5-2 in the Red Division.