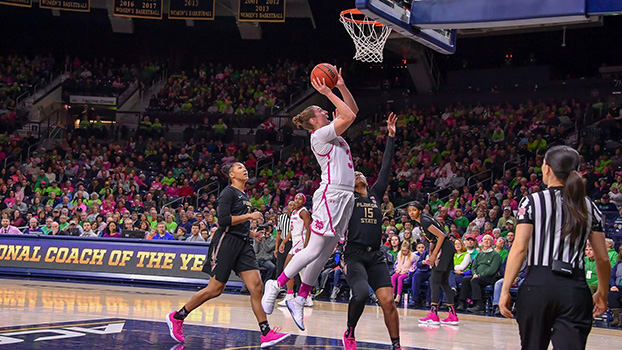 The Fighting Irish (22-3, 9-2) were powered by the duo of Arike Ogunbowale and Jessica Shepard, who combined for 53 points and 17 rebounds.

“I felt we had a lot more movement today,” said Notre Dame head coach Muffet McGraw. “We rebounded better and I was, overall, pleased with pretty much everything that happened on the offensive end. I thought Arike looked like her old self. She shot the ball really well and Jessica did a lot of really good things, so it was great to feel like we got it back a little bit.”

Shepard and Ogunbowale combined for 19 points in the first quarter to give the Irish a 28-22 advantage by the end of the period. Notre Dame shot 12-for-21 in a quarter that featured no break for the media timeout.

At 4:46 in the second, Ogunbowale seized the momentum for the home team by scoring eight straight points in under a minute. The senior hit back-to-back threes, which included a fadeaway deep in the left corner. Ogunbowale then earned a steal down on the other end before Florida State was called for an intentional foul, resulting in a pair of free throws.

All-in-all, the Irish ended the half on a 13-5 scoring spree to take a 52-38 lead at the midway point. Ogunbowale boasted 19 points at the half, followed by 16 from Shepard.

The Seminoles scored the first bucket in the third at 9:15 then were held scoreless by the Irish defense for a six-minute stretch. Notre Dame recorded a 15-0 run in that span, which led to a 74-50 lead heading into the fourth. The defense was once again led by Brianna Turner, who earned a season high tying five blocks for the third straight game today.

Abby Prohaska scored four of her six total points in the fourth to go with her season high tying five rebounds. Danielle Patterson and Jordan Nixon got on the board as well with three points each as the Irish outscored the Seminoles 23-20 in the fourth to arrive to the 97-70 final.

Lastly, Notre Dame sported pink-detailed uniforms in support of the annual Pink Zone game, which honors those who have battled breast cancer.

“My mom was a breast cancer survivor and I lost both my grandmas to cancer,” Ogunbowale said. “It was definitely an important game and we definitely wanted to honor everyone that has been affected by cancer and their families.”

Ogunbowale nearly netted a double-double with 27 points and nine rebounds. The senior connected on 5-of-7 from three, which tied her career high. Shepard was two rebounds shy of a double-double with eight boards and 26 points, as the latter was two points shy of her season high.

The Irish complete their home-and-home with Boston College, making the trip to Chestnut Hill, Massachusetts, on Wednesday. Tip is set for 7 p.m. on ACCN Extra.