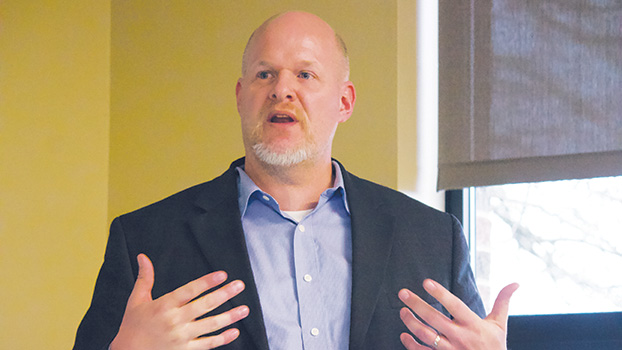 NILES — Seven months after first revealing their plans to the public, Michigan Department of Transportation officials’ vision for overhauling the U.S. 12 bypass over M-51 in Niles is coming into focus.

Their vision met a cold embrace, though, from the members of the community who attended the public presentation on the state’s current plans for the local interchange Wednesday.

Representatives with MDOT and its engineering consultant for the U.S. 12/M-51 project, AECOM, gave an update on their plans to transform the interchange before fielding questions from the audience during the public hearing, which took place at the Southwestern Michigan College Niles campus that afternoon.

Around 75 people attended the first of two presentations offered that evening — many of whom spoke out against the MDOT’s $8.7 million proposal to remove the aging U.S. 12 bridges and ramps currently used at the intersection. The agency’s current plan — one of several possible options for the interchange — would remove the elevation differences between the two highways and create a traffic light controlled four-way intersection, similar to the one currently in use just a short distance away at U.S. 12 and Third Street.

The public’s opposition to the plan was vehement, with one attendee bluntly telling AECOM’s Mike DeVries — who led Wednesday’s presentation — “this is bull—-.”

Among those who spoke out against the proposed intersection was Niles’ Scott Kane, a commercial truck driver who frequently traverses the U.S. 12/M-51 interchange. By removing the bypass, MDOT’s plan would not only cause frequent backups but would also spark increased accidents at the crossing, Kane said.

“They’re trying to save money, but they’re going to end up costing lives,” he said following the presentation.

Kane and others in the audience were also concerned that the MDOT’s proposal would prevent vehicles from directly turning left onto U.S. 12 at the intersection. Drivers instead would have to use dedicated turn lanes a short distance away from the interchange to change directions.

Another commercial truck driver in the audience, St. Joseph’s Mike Snook, complained that during peak traffic times, semitrailers and other massive transport vehicles may all try to use the same turn lane at once, disrupting the flow of traffic.

The state’s recommendation for the U.S. 12/M-51 interchange is one of several options officials first presented to the public during an open house hosted at SMC in July 2018. Other possible overhauls included a $16.2 million restoration of the current bridges and ramps; the creation of a $15 million diamond interchange, which would replace the current bridges and transform the looping ramps into traditional diagonal ones; the creation of an $8.7 million at-grade roundabout, which would also remove the bridge and ramps; and the construction of an $8.5 million four-way, traffic-light controlled intersection, similar to the current proposal but with direct left turns at the crossing.

Since summer, MDOT and AECOM narrowed down the options to the diamond interchange and the two traditional intersections. While costing slightly more than the direct left option, the indirect left turn intersection is the safest of the three, according to AECOM projections — one of the key reasons it jumped to the head of the pack in MDOT’s eyes, DeVries said.

While DeVries said the state’s plan will accommodate projected traffic along U.S. 12 up to 2043, Niles’ Kevin Varney was not convinced. He is worried that adding another traffic light a short distance away from the ones used at the U.S. 12 and Third Street, and M-51 and Bell Road intersections is likely to create massive congestion issues, he said.

“They’re selling us a bill of goods,” Varney said.

Like Kane and Snook, Varney said he would like to see MDOT instead implement the diamond interchange idea and retain the bypass over M-51.

The project — projected to take place in 2023 — is intended to improve the infrastructure along the U.S. 12/M-51 interchange. According to Kyle Rudlaff, MDOT project manager, the bridges at the crossing were constructed in 1955 and are considered to be in “poor” condition.

“We also want to address the fact that the pavement is in terrible condition, and is probably projected to get worse with all the freezing and thawing that’s going on this time of year,” DeVries said.

Based on feedback from last summer’s meeting, MDOT plans to make other improvements to the two highways, including repaving M-51 from the Michigan/Indiana state line to south of Chestnut Lane later this year, which is estimated to cost $4 million. MDOT also plans to repave the state highway from south of Chestnut Lane to M-60 and reconstruct U.S. 12 from Third Street to M-51 in 2023, for an estimated cost of $25 million.

DOT and AECOM officials have worked on the project since May 2018. Representatives will use public feedback gathered at Wednesday’s meeting to help finalize plans for construction, which they project to cement by spring.

Construction will likely begin in the spring of 2023, lasting through fall.