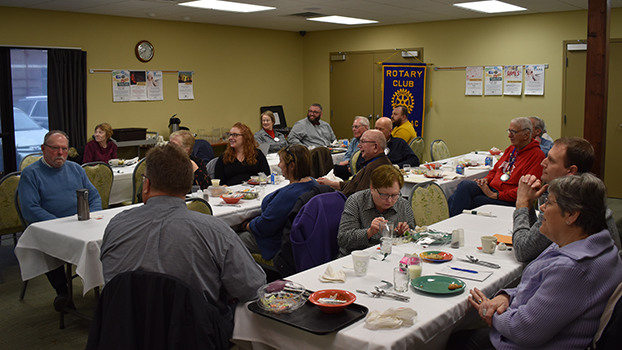 Cass COA’s Front Street Crossing has a variety of rooms including a conference room, where the Dowagiac Rotary Club met Thursday. The club had chili and salad and listened to Sheriff Richard Behnke’s recount of his vacation to Arizona. (Leader photo/ADAM DROSHA) BELOW: Pictured is Front Street Crossing. (Submitted photo)

DOWAGIAC — A little more centrally located and a little greener, the back-meeting room at Cass COA’s Front Street Crossing is a good size, aesthetic and location for the regular meetings of Dowagiac Rotary Club.

The Rotary Club was doing well at the Elks Lodge, located at 300 Riverside Dr., Dowagiac, the former regular venue for regular Rotary meetings. According to club president elect Melody Wallace, while the Elks Lodge was a “very nice place to meet,” Rotary was ready for a location more central to the community.

Wallace, along with Marilou Franks, began searching for a new location within the Dowagiac community that would fit the club well and fulfill the desire for more community visibility.

After researching several options, Wallace and Franks presented Front Street Crossing to the board and to the Rotary Club members. The room in the Dowagiac facility of the Cass County COA is on a trial run until the club can make a final decision on the meeting place. Wallace is optimistic about Front Street Crossing as a potential replacement.

“I think it was pleasant for the first time,” she said.

During the hour-long lunch, several members voiced their initial liking to the space, commenting that it was “comfortable” and “a good choice.” Current president of Rotary John Seculoff agreed with the sentiments in the room and with Wallace and Franks’ selection. Seculoff sees the short-term move as a practical measure.

“We have senior Rotarians that need easier access, and steps are not the best thing. The kitchen was important to us, too. We’ve always been spoiled with Elks, but having a kitchen here makes lunches a lot smoother,” Seculoff said.

The practicality of the move is not only accessibility and amenities, according to Seculoff. Becoming more visible and central is directly related to the club’s efforts to recruit new members.

“We’re constantly looking for new members with new energy. We’re to a point that we’re just trying to find ways for people to remember us as a community organization,” he said.

Having only been stationed in Dowagiac for about three years, Seculoff was not sure how long the Rotary Club had been meeting at the Elks Lodge, but to his knowledge it had been decades. Reevaluating the regular meeting place of Rotary is something the club does annually, but had not considered until recently.

“Apparently, every five to 10 years, the club says, ‘we should check out another place.’ It just happened to fall when I was president this time. Elks said ‘check it out, do what’s best for club, and we’ll have you back if you need us,’” he said.

At the end of the 30-day period, during which there will be four Thursday club meetings, the club will reconvene to determine if Front Street Crossing is the right fit for its purposes and needs.

“We’ll take everybody’s temperature and see what they liked and disliked, look at the [financial] numbers,” Seculoff said.