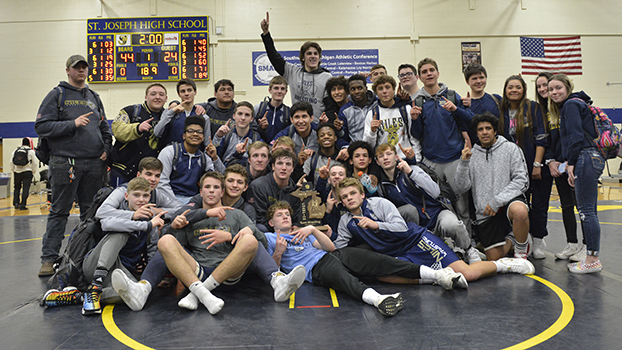 Both played key roles this season as the Vikings reclaimed their title with a 44-24 win over arch rival Lakeshore at St. Joseph High School Wednesday night.

Veteran Niles coach Todd Hesson has a lot of wrestlers just like Buckland and Soto, who had to wait their turns to step into starting roles and to begin winning their own championships.

Trailing 24-9 with seven bouts remaining against the Lancers, Hesson turned to those upperclassmen to deliver.

He started by telling junior Javond Ball that it was time to run the table on Lakeshore and win the final seven bouts and the district title. Ball went and gathered the other six wrestlers who were awaiting their turn on the mat, and he and Hesson told them the same thing.

And thats exactly what the Vikings did. They won all seven of those bouts, several of them with gritty efforts, to head back to the Division 2 regional where they will face host Edwardsburg Wednesday night.

“We talked a little bit about it after we lost at 130,” Hesson said. “We said, ‘Let’s run the table,’ and the kids did. We had some tough matches, but the kids came through.”

It started with Ball, who scored a 25-10 technical fall at 135 pounds against Lakeshore’s Justin Crowder.

Bryce Brust, the transfer from Battle Creek Lakeview, kept it going with a pin at 140.

Kade Wagley energized his teammate,s and the large crowd of Niles fans when he scored a reversal with just 20 seconds left in the match at 145 to edge Sam Prince 8-6.

The Viking train had long left the station and was building up plenty of momentum by the time Buckland pinned Lakeshore’s James Harris in 1:24. Cole Simpson followed with a 5-4 decision over Erik Taylor at 160 pounds as he scored a last-second takedown for the victory.