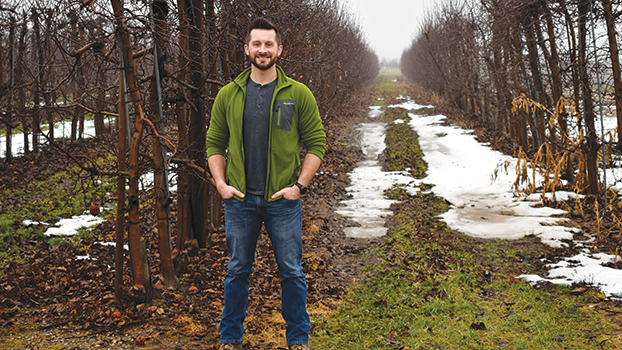 DOWAGIAC — Though it will be months until fresh fruit hangs once again from the trees at his farm, Dowagiac farmer Jeremy Shank has apples on the brain, thanks to a recent recognition by the U.S. Apple Association.

“The 2019 Young Apple Leaders’ class is the largest in USApple history, and the industry is fortunate to have so many bright young people who want to be involved,” said Jim Bair, president and CEO of USApple, in a recent press release. “These young leaders are enthusiastic and eager to make a difference. Whether it is tariffs that are damaging our export markets or the need for labor to harvest our crops, they understand what is being debated and decided in Washington today will have long-term implications for the next generation of apple producers and they want to be in a position to help shape that policy.”

The Young Apple Leaders program, now in its 10th year, equips the next generation of American apple growers and leaders with an understanding of federal regulatory and legislative apple issues and provides an opportunity to learn from peers and apple leaders from around the country, according to program representatives. Young apple growers and individuals in apple-related businesses who are at the start of their career through the age of 35 are eligible to participate.

Shank and the rest of the 2019 class will visit Washington D.C. on March 13 as part of USApple’s Capitol Hill Day. Joining USApple members from across the nation, the young leaders will meet with members of Congress to discuss issues affecting the future of the apple industry.

Shank said he was appreciative of the recognition from USApple and was excited to be a part of the 2019 Young Apple Leaders.

“It is definitely an honor,” he said. “[Fruit farming] is something I have always loved and been passionate about, and that passion has definitely grown over the years.”

Shank was born and raised around farming, which he said has made him love the trade, despite the difficulty and stress of the work itself.

Because of his love of the trade, Shank said he is most looking forward to learning more about farming and advocating for the apple industry when he visits Washington D.C. with the other Young Apple Leaders.

“We are the future,” he said of the 2019 Young Apple Leaders. “It’s extremely important to be involved and understand the topics and legislation that surround that so we can make a difference.”