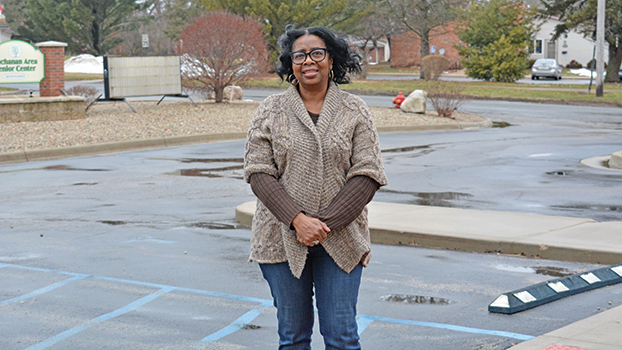 Pictured is Jeanne Harris. She is the vice president of the Buchanan Area Senior Center and is involved in many Buchanan activities. (Leader photo/SARAH CULTON)

At 68 years old and retired, she still keeps a schedule that would make many 20-somethings ask for a break, as she moves from committee to committee working to make sure that her home town is a place people want to live and work.

“I love my community,” she said. “I’m not one to sit around and do nothing. I need to be involved.”

Harris is the vice president of the Buchanan Area Senior Center. She also sits on the Buchanan Promise Committee, was instrumental in implementing the Buchanan Northside Reunion — which is the city’s reunion for African Americans that grew up in Buchanan’s Northside community — and is involved in One Buchanan.

Later this month, she will serve as emcee for One Buchanan’s Black History Month Forum to take place from 4 to 6 p.m. Feb. 24 at the Buchanan Area Senior Center.

Born and raised Buchanan, Harris said she works in the community to both remember its past and make its future one worth looking forward to.

“It was wonderful growing up here in Buchanan, and it is a wonderful community to live in now,” she said.

“The Northside has produced accountants, lawyers, teachers, business owners,” Harris said. “We have produced a lot. … There is a lot of history here in Buchanan and the north side.”

Having spent her life in Buchanan, Harris has seen history in the making such as living through the civil rights movement, marching in Niles in the 1960s to protest the police killing of an African American man and the changing of the culture after Clark’s Equipment left Buchanan.

However, through it all, Harris said that Buchanan remained a tightknit community that stuck together and was worth being proud of.

The history of the Buchanan’s African American and Northside community has always been known to those from the Northside and more recently has been celebrated every other year through the Northside reunion, which Harris helps to organize.

However, Harris said she now is excited to share that history with the greater community through One Buchanan’s Black History Month forum later this month.

“We want people to remember their roots,” she said. “It’s very important for people to know because none of this is in the history books.”

Harris does not only look to remember Buchanan’s past. Through her work on the Buchanan Promise committee, she looks out for the city’s future and for the future of young African American students.

The Buchanan Promise is a program that provides local students with scholarships for post-secondary education. As a member of the promise committee, Harris said she acts as a representative for the African American community.

Even though she is retired, Harris said she has no plans of slowing down. She plans to continue to help secure local students’ futures and volunteering and helping anywhere she can in the community.

“It’s important for me to represent,” she said. “People always want things to change, but no one wants to get involved. There needs to be a person that has no problem getting involved or speaking up. … There needs to be a leader, so I guess I’m a leader. I’m happy to be that person.”