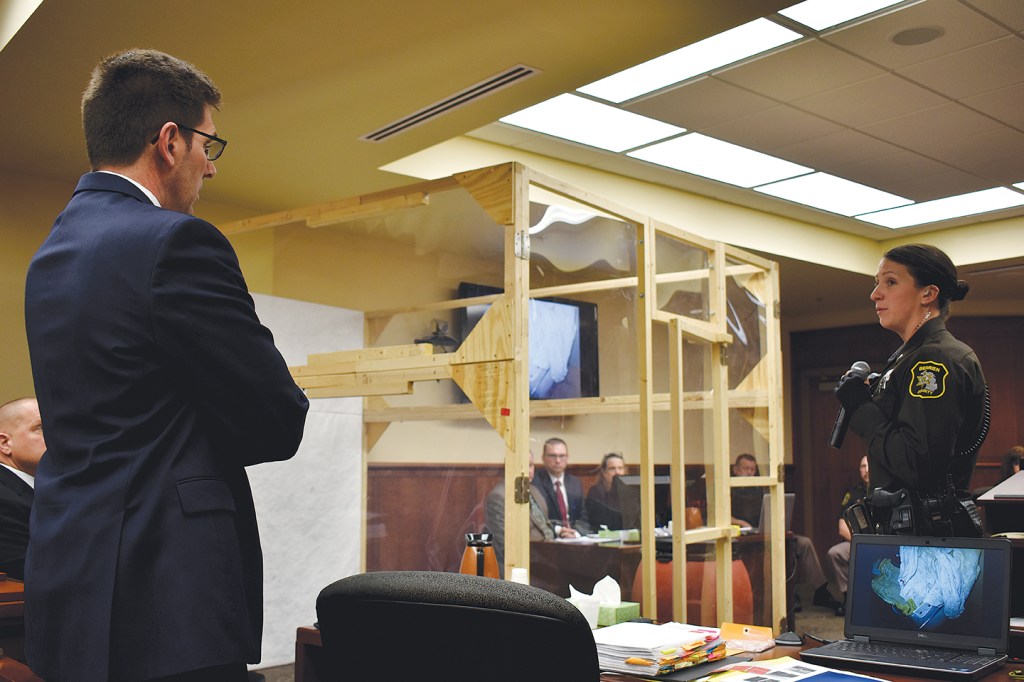 ST. JOSEPH — When jurors walked into the courtroom Wednesday morning, there was a structure about the size of a large walk-in closet made from wood and transparent plastic material.

This life-size replica was modeled after the marijuana grow room where Carla Jean Lewis was fatally shot Aug. 13, 2017. The prosecution used it throughout day two of John Benton Lewis’ trial at the Berrien County Courthouse in St. Joseph.

John is charged with premeditated murder, following Carla’s death at their home, 1429 Lawndale in Niles Township. He is also charged with possession with intent to manufacture for violating medical marijuana laws.

Assistant Public Defender Jolene Weiner-Vatter objected to the model.  She described it as overtaking the room and said it was difficult for John to see the jury. However, Presiding Judge Gordon Hosbein overruled and said he could see it benefitting the jury’s understanding of the crime scene throughout testimony Wednesday.

The courtroom listened and watched dash cam footage that was recorded when Frucci rushed to the scene. With a gun in her right hand and medical aid bag in the other, Frucci approaches the home. Shortly after, several other officers, also with weapons drawn, are seen running toward the open garage.

Audio from her mic picked up Frucci repeatedly yelling “Sheriff’s Department! Come out with your hands up!”

As officers moved deeper into the home, it became difficult to hear the audio recording. Frucci told the court that once police reached the basement, cell phone and radio service was poor. She described having to go to the basement stairwell to take a call from the sheriff.

Vigansky next had Frucci use the model to demonstrate how she found Carla in a crouched position. The model also demonstrated the squat entrance to the room and the door that did not open all the way. Frucci said she had to pass through it sideways in order to go inside.

Frucci observed four holes in the back wall of the room which she said appeared to be bullet holes. Vigansky asked whether the pattern of bullet holes indicated the number of targets.

“One person. [Because of ] where Carla was positioned and the group where they were located,” Frucci said.

Weiner-Vatter had Frucci listen to the dash cam recording again. She asked Frucci if she heard another officer remarking that they “heard him” but could not see him. Frucci had testified that despite officers shouting that they were there, no one had responded. At approximately one minute into entering the home, the recording appeared to pick up someone saying they heard something.

Two other officers who arrived on scene Aug. 13 also testified about what they had witnessed during the trial Wednesday. Berrien County Sheriff’s Deputy Angela Baggett and Abigail Pifer, a Berrien County Sheriff’s Department officer, both said that they had not heard Lewis cry out for help. When the officers reached the basement, they did hear a “male voice” later identified to be Lewis.

Weiner-Vatter asked all police officers during cross-examination whether they had tested if a person could be heard in the basement from the upstairs entrance. The officers said they had not.

Other witnesses who testified Wednesday talked about Lewis’ demeanor after he was found in the marijuana grow room near Carla’s body.

Don Hughes, a paramedic for Southwest Michigan Community Ambulance Service, was among those called to the scene that day. He described Lewis as emotional and shaken, but noted that Lewis did not appear to have been crying.

Weiner-Vatter countered by asking Hughes if he was aware that the emergency call had been placed about 35 minutes before he showed up, which she suggested could have given blood time to dry or Lewis to cease crying. Hughes said he was not.

After his examination, Baggett interviewed him. At that time, Lewis repeatedly asked to talk with his wife. Throughout his encounter with police, he kept asking whether she was awake and if he could speak with her.

Rick Biggart, a detective with the Berrien County Sheriff’s Department, said he interviewed Lewis about the events that unfolded on Aug. 13. Lewis recapped what he had told officers at the scene: that two large African American men had appeared in the doorway of the marijuana grow room while he was moving plants with Carla and fired at them.

“He couldn’t give me an explanation of how these individuals got into the house,” Biggart said. “Nobody just shows up at a house and just starts shooting for no reason.”

Biggart did say when he asked Lewis “who could have done this” he mentioned some individuals who were looking to start a marijuana dispensary in Belle Plaza, where Lewis ran his Sevenleaves Compassion Club.

“He claimed that that was probably what it was in regards to, some type of retaliation,” Biggart said.

During their interview, Biggart received information from another investigator that a man named Justin Hicks had turned in ammunition and a magazine to police that was similar to what was found at the scene of the crime. Hicks had testified during the preliminary exam in September 2017 that Lewis had asked him to pick up the ammunition from his Sevenleaves Compassion Club.

“When I mentioned the name Justin Hicks, he immediately perked up,” Biggart said. “I looked him straight in the eyes and said he was not telling the truth. He basically stated, ‘this interview is done. I want a lawyer.’”

The trial continues Thursday at the Berrien County Courthouse in St. Joseph.