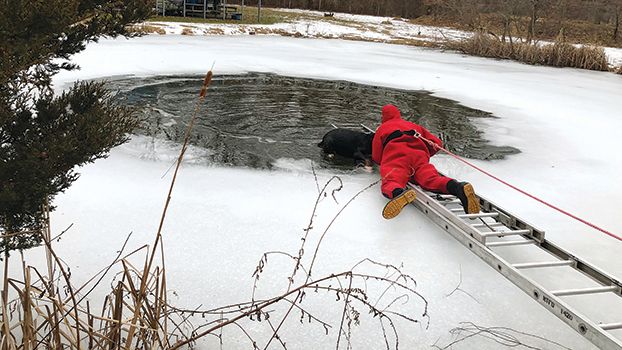 A Niles Township firefighter carefully slides onto the ice and helps a dog, Flo, out of the water. (Submitted photo)

Niles Township firefighters responded just after 8 a.m. to 2017 S. 17th St. Pet owner Patty Finney called to report that her dog Flo had fallen into a large pond in their backyard. An aerator inside of the pond kept the water from freezing over in the center. While Flo was not supposed to be near the pond, the 1-year-old Bernese had dashed out onto the ice and fallen into the water.

Niles Township Fire Chief Gary Brovold said it took first responders only a couple of minutes to rescue Flo from the perilous situation. The Niles City Fire Department was called to the scene and provided cold water suits and diving equipment.

Firefighters extended a ladder across the frozen surface of the pond to the water in the center. After putting on a cold water suit, Niles firefighter Rory Iwaniuk crawled out on the ladder and was able to help pull Flo out of the water and onto the ice, where she quickly trotted away unharmed.

Brovold said Finney was grateful to firefighters for saving her dog.

“To a lot of people, their animals are like children,” Brovold said. “They are part of the family, and it’s devastating to lose their pets. [Finney] was quite concerned about her dog. She was very appreciative to see our actions.”

Brovold advised that residents train their pets to keep away from bodies of water during the winter time. Another option is finding a way to block pets from accessing icy water, like building a barrier.

“It can be a difficult thing to do if you have a large pond, so I think it more comes down to training your animals,” Brovold said.

“We never want to risk a human life to go into a situation, but if you have all the equipment and the planning to do it, you can do it successfully, and that’s the way it happened today,” Brovold said.