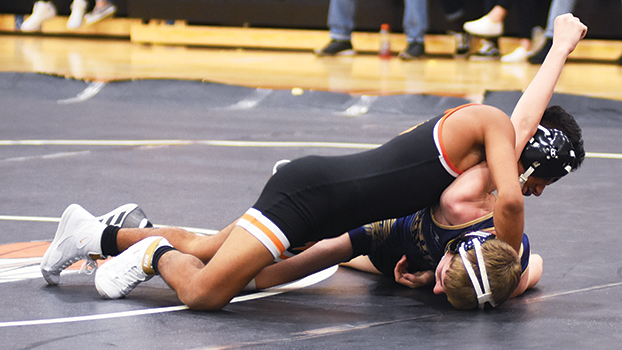 DOWAGIAC — The Dowagiac wrestling team has wrapped up the regular season and has set its sights on defending its Division 3 district championship when the state tournament begins in Three Rivers on Wednesday.

The Chieftains are coming off a third-place finish at the Wolverine Conference meet at Sturgis on Saturday.

Dowagiac had three individual champions in Jordan Simpson, Alex McIntosh and Wyatt Bailey. The Chieftains also had a pair of runner-up finishers in Deny White and Lamberto Paredes.

Edwardsburg defended its conference title as it scored 176.5 points to easily outdistance runner-up Otsego, which finished with 134 points.

The Chieftains finished with 131 points.

“It was good and bad,” said Dowagiac coach Colin Burandt about his team’s performance on Saturday. “Overall, I think we wrestled pretty well. We had six in the finals. We went .500 in the finals against some pretty tough competition.”

What was disappointing for Burandt and the Chieftains was the fact that some wrestlers who were seeded failed to score points. That turned out to be the difference between second and third place.

Dowagiac will face Paw Paw in the semifinals at 6 p.m. on Wednesday. Host Three Rivers will face Constantine in the other semifinal.

The championship match will begin 10 minutes after the completion of the last semifinal.

Burandt feels that the Chieftains head into the postseason in pretty good shape.

“We just need to stick with what we have been doing all year,” he said. “A lot of the teams that are in our district are also in our conference. So, we know how they wrestled and we know what we need to do against them.”

Unlike previous season, Dowagiac will be the hunted rather than the hunter. But do not tell Burandt that.

“We preach to the kids that this is how the season goes,” he said. “We wrestle tough competition week in and week out to prepare for this part of the season. We still feel like we are the underdogs because we are not ranked in the state. So we can still wrestle with a chip on our shoulder because we are not getting the respect at the state level.”