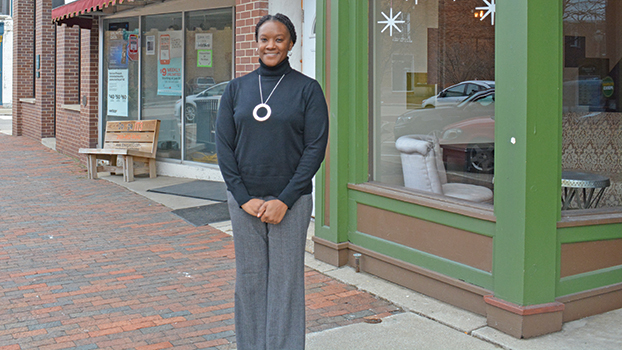 DOWAGIAC — When Councilwoman Danielle Lucas walked into downtown coffee shop the Baker’s Rhapsody during her lunch break Tuesday, she did not get very far before she was greeted by a round of hellos and was pulled into a conversation at a nearby table.

“I’ve lived in this community forever, and you get to know everyone,” she said, once she had finished her hellos and picked up her coffee. “I love that, and I hope that I am able to be an example to my community.”

Lucas, 43, of Dowagiac, is the only current African American woman to sit on the Dowagiac City Council. She is a representative for Ward 1 and was appointed in 2015. She is also a financial aid analyst at Southwestern Michigan College. Through her positions, Lucas said she hopes to give back to the community and serve as a role model for other young African American women.

“That is one way that I hope I can give back,” she said.

Though it was years ago, Lucas can still call to mind her exact mixture of nervousness and excitement she felt as she was sworn in as a city councilwoman for the first time. Though Lucas said she never thought she would become a councilwoman, she said she has never regretted it.

“I’m very grateful for the opportunity to serve our community in this capacity,” she said. “I knew I could make a difference in Ward 1. … We have worked to make things better for our ward.”

“I’m always involved in something,” she said.

By working to make the city a better place to live and work, Lucas said that she can serve as a role model for African American women like herself. Though she said she did not have a role model that looked like her in government as she was growing up, she learned from the strong women in her family — particularly her mother, who grew up with 11 brothers, and her grandmother.

One young girl Lucas particularly wants to inspire is her 3-year-old daughter, JeNora. Already, JeNora has been a city council meeting and goes with Lucas to many community events.

Going forward, Lucas said she plans to continue to listen to and learn from the community of Dowagiac so that she can serve as a good representative for the city.

“I’m just hoping that I can be an example to people in my community and that I can make the right decisions as a council member,” she said.