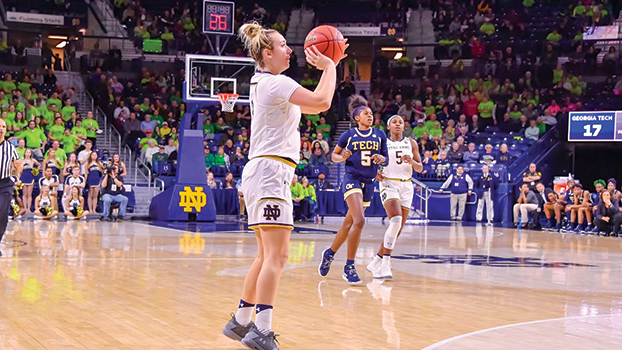 NOTRE DAME, Ind. — The No. 5 Notre Dame women’s basketball team limited Georgia Tech to 30 points through the first three quarters before rolling to a 90-50 victory over the Yellow Jackets.

Senior guard Marina Mabrey led the Fighting Irish (21-2, 8-1) with 20 points on a 6-for-7 shooting performance from three-point range. It marked her third straight game with 20 or more points.

“I thought our defense in the first half was really terrific,” Karen & Kevin Keyes Notre Dame head coach Muffet McGraw said. “Defensively, we found the shooters, rebounded, ran — we did everything. We held them to 13 points (in the first half) and that was really something to be happy with.”

Notre Dame’s first five field goals were each made by a different starter, as they shot out to 12-6 lead, which was later extended to 28-10 by the end of the quarter. Irish dished out nine assists on 11 made field goals in the opening period, led by 10 points from Jackie Young and eight from Jessica Shepard.

However, it was Notre Dame’s defense which stole the headline of the first half. The Irish held Georgia Tech (13-9, 3-6) without a field goal for a 13 minute and 31 second stretch, spanning from 6:23 in the first to 2:52 in the second. In fact, the Yellow Jackets were limited to just one field goal, a three-pointer, in the second, as the Irish boasted a 54-13 advantage at the half. It marked both Notre Dame’s best defensive quarter and half of the season.

Marina Mabrey powered the offense in the third, scoring 12 of the team’s 20 points behind four made three-pointers. In fact, Mabrey connected on three treys in three straight possessions.

“It’s really nice that my teammates are finding me in transition, that they’re looking for,” Mabrey said. “The whole team has confidence that I can knock it down. It’s a good feeling.”

Young, Shepard and Ogunbowale joined Mabrey in double figures. Young shot 8-for-11 from the field to finish with 18 points and eight rebounds. Shepard tallied 13 points to go with her season high tying four steals. Ogunbowale added 12 points and four assists, while Brianna Turner turned up the defensive pressure with a season high tying five blocks to go with her eight points.

For the second time of her career, Mabrey has recorded three straight games with 20 or more points. In addition, Mabrey tied her season high of six made treys for the second consecutive game. Her career high is seven, set vs Texas A&M in last year’s NCAA Tournament.

Stat of the game

Notre Dame posted a 24-0 run in the first half, marking its longest of the season.