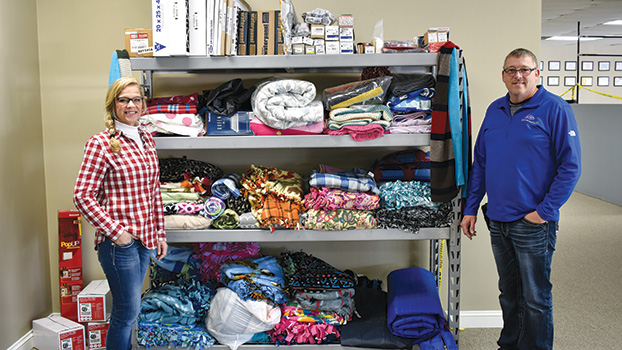 Michiana Heating & Air Conditioning was among the businesses that served as a temporary warming shelter during the cold last week. Pictured from left are Janet Lassen, marketing director, and Steve Gillispie, business president. (Leader photo/KELSEY HAMMON)

NILES — As the polar vortex descended upon the Midwest last week, volunteers from Michiana Heating & Air Conditioning, the Niles Salvation Army and UltraCamp were among the few who did not rush to the safety of their warm homes.

The staff at Michiana Heating & Air Conditioning opened up its showroom to serve as a temporary shelter.

The Berrien County Sheriff’s Department and Niles Lakeland Hospital were among those who coordinated with Michiana Heating & Air Conditioning to assure that individuals with nowhere to go were safe from the biting cold. Among those sheltered was a man who had just been discharged from Lakeland Hospital. The man’s mom, who also did not have anywhere to go at the time, was sheltered, too.

While Gillispie and Lassen said they had been prepared for more people, they were happy to help the few that came to the door.

“If there was even one person that we could get out of the cold, that is what we wanted to do,” Gillispie said. “There are not too many places in Niles that have the ability to house 100 people if needed to.”

Now, Gillispie said he is considering working with local outreach groups to potentially use the space as an emergency shelter in the event of other inclement weather or disasters.

There were 12 volunteers who helped Lassen and Gillispie run the shelter. Both Lassen and Gillispie thanked Kim Savage for volunteering to help oversee emergency operations. Savage has experience helping those in need. She is the former owner of Eleventh Harvest Café. In addition to running the restaurant, she opened a soup kitchen out of the business to serve those in need.

They were also grateful to the community for donating food, water, blankets and a number of other supplies. Lassen said they got such a great outpouring of donations that they were able to box and send some of the supplies to a shelter in Elkhart that started running low on food, hot cocoa and water.

“They were very grateful for that,” Lassen said.

The business intends to donate the leftover food to a local pantry and some of the household cleaners to animal shelters, Lassen said.

Gillispie said the cold snap was a busy time for the business, with his crew members out and about repairing furnaces throughout last week.

“It always feels good in these times to go out and get someone’s heat going or their air conditioner,” Gillispie said. “That’s always a wonderful thing, but then to have this [the shelter] too. It’s kind of two-fold.”

In addition to helping their community, Gillispie said a significant benefit to opening the warming center was making contacts with people like Savage who volunteer regularly.