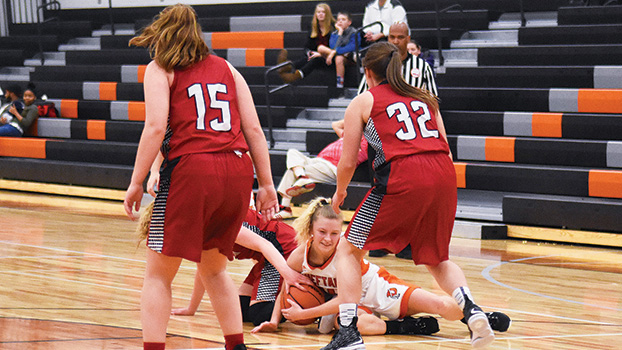 DOWAGIAC — If the Dowagiac girls basketball team is going to build its program, it will have to do it with its underclassmen.

The Chieftains have five seniors on their roster. Those seniors will be playing their final games in just over a month’s time.

That means the three juniors and three sophomores will have to pick up the reigns and carry this program forward.

One of those players, junior Hayden First, stepped up Saturday afternoon as Dowagiac snapped a six-game losing streak with a 42-27 win over visiting Paw Paw in Wolverine Conference non-divisional action.

First scored nine points for the Chieftains, while being aggressive at both ends of the floor. Five of those points came in the opening quarter when Dowagiac grabbed a 13-11 lead after being down 7-0 to start the game.

Dowagiac coach Brent Nate said that first has picked up her game over the past couple weeks and looks forward to seeing how she contributes moving forward.

“She has played well the past two or three weeks,” he said. “She was the leading scorer at Three Rivers. She is starting to understand her role. She has adjusted to the speed of the varsity game now. She also understands where she fits in with our team.”

Dowagiac, playing less than 24 hours after its 68-26 loss to Edwardsburg, was slow to get out of the gate against Paw Paw, which also played the night before.

Once the Chieftains got their legs under them, they dominated Paw Paw, outscoring them 42-20 the rest of the way.

Both teams struggled to put the ball in the basket in the second quarter and as a result, the teams were deadlocked at 17-17 at the intermission.

Dowagiac outscored Paw Paw 25-10 in the second half to pull away to the easy victory.

Amiyah Smith, a two-time All-Wolverine Conference player who decided to come out for basketball after the winter break, gave Dowagiac an inside punch, while Kellyn Daly did their damage from outside the key. The two scored 13 and seven points respectively.

“She gives us a little scoring punch and some rebounding,” Nate said of Smith. “She (Taylor Pye) does her thing. She rebounds and plays defense.”

Dowagiac’s full-court pressure defense bothered Paw Paw. It did not always create turnovers, but it kept Paw Paw out of its offensive rhythm and allowed the Chieftains to feed off of it.

“That is one thing we talked about before the game,” Nate said. “Taking pride in our defense. If they were going to beat us, it was going to be with jump shots today. The first half we did not rebound as well. The second half was much better and we limited their second chances.”

On Friday night, Edwardsburg outscored Dowagiac 13-1 and never looked back.

Smith had a team-high 10 points, while Daly added six points.

Kaitlyn Zarycki scored a game-high 22 points for Edwardsburg, which also got 14 points from Abbey Krugh and 13 points from Kaitlynne Allen.