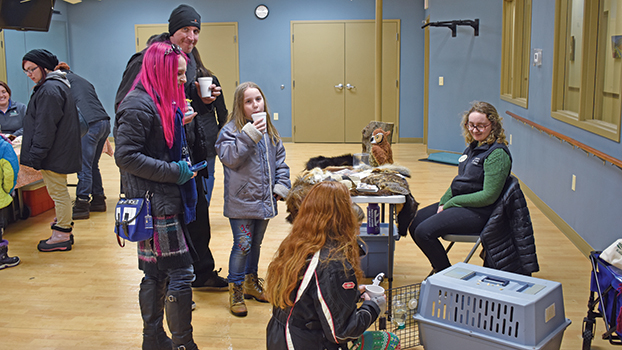 DOWAGIAC — The inside of the Front Street Crossing Cass County Council on Aging was transformed into a wildlife sanctuary Saturday, complete with lizards, bunnies, turtles and a sampling of various furs, in order to talk to visitors about animal conservation.

The Front Street Crossing COA hosted an Animal Habits exhibit during the Dowagiac Ice Time Festival Saturday. The event, which ran from 11 a.m. to 2 p.m., featured two presentations, one from the Potawatomi Zoo and one from the Kalamazoo Nature Center. Over the course of the festival, more than 300 people visited the exhibit at the COA.

The Animal Habits event was just one of several hosted during the Dowagiac Ice Time Festival, which included a Cass County Animal Control adoption event, a chili crawl, a daddy-daughter dance and more.

The Potawatomi Zoo exhibit featured a spider tortoise, an endangered species from Madagascar, and a lizard and a snake to show off to visitors at the Ice Time Festival. The booth also featured “biofacts,” which are furs, scales, feathers, skulls and other artifacts that people can pick up and touch to learn more about specific animals.

Skye Hoffman, education curator with the Potawatomi Zoo, said the goal of the “animal habits” event was to raise awareness about animal habitats, animal welfare and conservation. The zoo hosts similar events throughout the year at libraries, schools and nursing homes.

“This lets people see animals up close that they normally wouldn’t see every day and learn more about them,” Hoffman said. “It also gives us the opportunity to start talking about conservation to kids at a young age. It’s really important to foster that love of wildlife.”

Tasia Heintzelman, of the Kalamazoo Nature Center, agreed. Her booth featured a Lionhead bunny and various furs to talk to visitors about how animals operate in the winter months.

“[The exhibit] is a really good way for kids to make a connection with what is happening in nature,” Heintzelman said.

Both Hoffman and Heintzelman said Saturday was their first time attending the Dowagiac Ice Time Festival.

“We are happy to be here,” Hoffman said. “It is a great community event, and we are always looking for ways to connect more with people.”

“We thought this was a great opportunity to meet a new community and get our name out there,” Heintzelman added. “There is a lot of wildlife out there to see. Being able to make a connection between people, animals and the outdoors is something we want to share.”