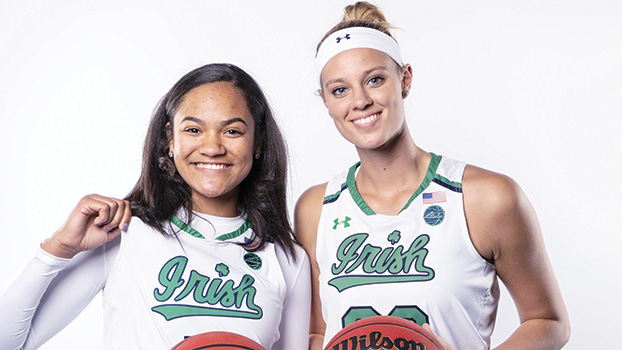 Anaya People and Samantha Bruenelle, who have already signed with Notre Dame, will play in the McDonald’s All-American Game in Atlanta. (Leader photo/Submitted)

NOTRE DAME, Ind. —  Both members of Notre Dame women’s basketball’s Class of 2019 signees picked up a major honor on Thursday. Samantha Brunelle (Ruckersville, Va.) and Anaya Peoples (Danville, Ill.) were named to the 2019 McDonald’s All-American Game, which will emanate from the State Farm Arena in Atlanta on March 27.

However, Brunelle and Peoples will have to wait till next fall to officially team up, for the duo will be lined up on opposite sides for the 42ndannual event. Brunelle will compete with the East Team while Peoples will be a part of the West.

Brunelle and Peoples, both five-star recruits, helped Notre Dame land another top-10 recruiting class, according to ESPN. Brunelle, once ranked as high as No. 1 in the country, is a three-time gold medalist with Team USA and the reigning Gatorade & USA Today Player of the Year in Virginia. The 6-2 forward averaged 30.0 points, 15.6 rebounds and 3.5 assists as a junior.

Peoples, a 5-10 guard ranked 21st in the class, also struck gold last summer at the FIBA Americas U18 Championship. As a junior, Peoples averaged 16.9 points, 6.7 rebounds and 4.7 steals, leading Schlarman High to a state title.