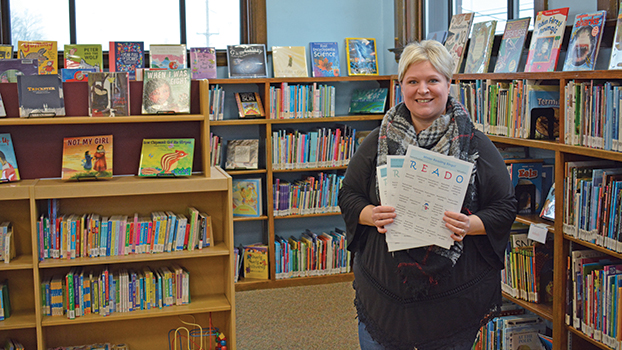 DOWAGIAC — Saturday, during downtown Dowagiac’s annual Ice Time Festival, visitors will have a chance to get out of the cold and create a miniature winter wonderland of their very own, thanks to the Dowagiac District Library.

The library will be hosting two youth-centered events during Saturday’s Ice Time Festival. From 10 a.m. to 1 p.m., the library is inviting the public to visit and create snow globes to take home with them.  Also during the festival, the library will host a kickoff event for the Southwest Michigan Teen Creative Writing Challenge, starting at 11 a.m. in the upstairs youth department. Both events are free and open to the public.

For the snow globe craft, the library will set up a table for local and visiting youth to create a snow globe out of small jars. Children will have their choice of several figures — from penguins to dinosaurs to safari animals — to glue into the lid of the jar, which will then be filled with water, glycerin and a healthy dose of glitter to create a customized snow globe.

Supplies for the craft are limited, so youth services coordinator Melissa Phillips recommended that Ice Time Festival goers visit the library sooner rather than later during the day to partake in the craft.

“It’s just a fun wintertime craft for people who are already downtown,” Phillips said. “It gets people inside and out of the cold for at least a few minutes. This craft is super simple and geared toward kids. … It seemed like the perfect winter-themed craft.”

The challenge is a collaboration between many libraries in southwest Michigan meant to encourage teens in grades seven through 12 to become involved in creative writing. Teens can submit fiction, poetry, comics and cover art to win a top prize of $100 in each category and age group. The submission period is from Feb. 1 to April 12. For more information about the contest, visit teencreativewritingchallenge.wordpress.com.

The Dowagiac District Library’s kickoff event will take place at 11 a.m. during the Ice Time Festival. During the event, participating teens will learn about the Southwest Michigan Teen Creative Writing Challenge and will have the chance to take part in a mini writing challenge with the opportunity to win a prize valued at $30.

Phillips said she thought hosting the kickoff during the Ice Time Festival was a good idea as it is the day after the submissions to the contest open and many people will already be out and about for the festival.

She added that she believes the contest will be a good opportunity for young writers and would encourage any local youth to participate in the kickoff event.

“There are kids out there who love to write, and they need an outlet,” Phillips said. “This is an outlet for them to be creative in their own way.”

Phillips said the Dowagiac District Library was happy to host both the teen creative writing kickoff and the snow globe craft during the Ice Time Festival.

“It’s part of being part of the community, and I think libraries now are becoming not just a place to do homework or study or get a reference,” Phillips said. “It’s also a community center. As much as we can be visible and let people know that we want them to take advantage of all we have to offer and want to give them an experience they might not have otherwise had, the happier we will be.”