Postseason just around the corner 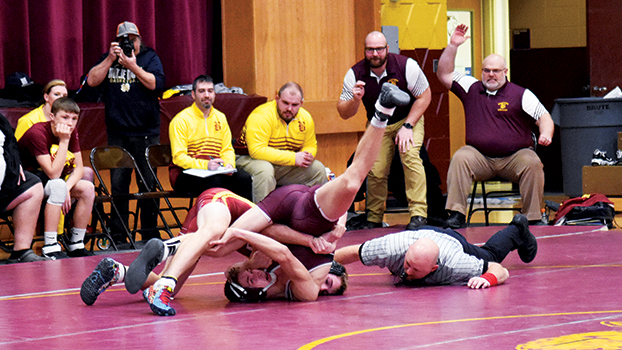 The Brandywine wrestling team will travel to Three Oaks on Saturday to compete in the BCS Athletic Conference Tournament at River Valley High School. (Leader photo/File)

NILES — Area wrestling teams are hoping Mother Nature gets the snow and cold out of her system this week as the postseason is set to begin on Saturday with conference tournaments.

In Division 2, Niles will travel to Stevensville for the SMAC Tournament at Lakeshore High School. Wrestling is set to begin at 11 a.m.

Dowagiac and Edwardsburg will travel to Sturgis for the Wolverine Conference Tournament. Wrestlers are scheduled to take the mat at 9 a.m.

Brandywine and Buchanan will make the short trip over to Three Oaks to compete in the BCS Athletic Conference Tournament being hosted by River Valley. Wrestling is scheduled to begin there at 9 a.m.

Cassopolis will White Pigeon for the Southwest 10 Conference Tournament.

Wrestling is scheduled to begin at 9 a.m.

In Division 2, Niles will face host St. Joseph in the semifinals at 6 p.m., while in the other semifinal, Lakeshore will face Benton Harbor. The championship match is set for 10 minutes after the completion of the last semifinal.

Edwardsburg will travel to Sturgis and will face the host Trojans in the first semifinal at 6 p.m. Vicksburg and Coldwater will compete in the other semifinal.

In Division 3, Dowagiac will face Paw Paw in one semifinal at Three Rivers, while the host Wildcats will take on Constantine in the other semifinal. Both matches begin at 6p.m.

Buchanan, meanwhile, will head to Coloma for its Division 3 district. The Bucks will wrestle Berrien Springs at 6 p.m., while in the other semifinal, the host Comets take on South Haven.

Brandywine will host the Division 4 district and will face Eau Claire in the first semifinal at 6 p.m. River Valley received a first round bye and will wrestling the Beavers-Bobcats winning 10 minutes after the completion of their semifinal match.

For individual districts, Niles and Edwardsburg head to Stevensville for the Division 2 tournament, while Dowagiac and Buchanan will wrestle at Constantine in Division 3.

In Division 4, Brandywine and Cassopolis will compete at Lawton.