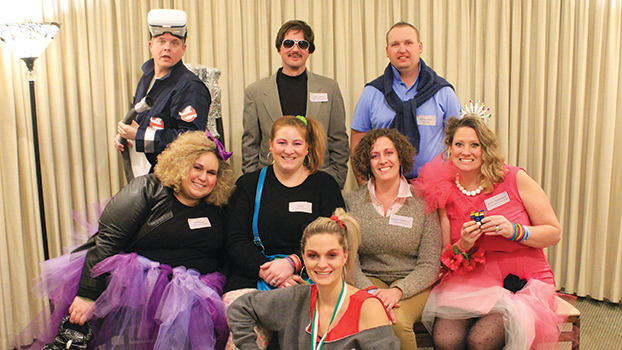 For the event Jan. 26, 40 people dressed in ‘80s-style fashion. The effort raised more than $1,000 for the Coats of Caring initiative that funeral home owners Sabrina and Steve Wickens kick-started late last year. Through Coats of Caring, the business donates collected coats to the Niles Salvation Army, Ferry Street Resource Center and Evy’s Closet.

The charity organizations expressed a need for children’s coats. While the funeral service put out a calling for children’s coats, they did not get much response. So, they decided to raise money to buy new winter gear for those in need. Last week’s funds helped them to purchase 32 coats for children and eight pairs of snow pants.

Sabrina said it was fun to see people support the cause and get in the spirit of the event.

“The night went really well,” Sabrina said. “Everyone enjoyed themselves and everyone dressed up in costumes. Some people really went all out with their costumes.”

The murder mystery setting was an album and fragrance release party for international pop idol Debbie Gribson. As the celebrities mingled, they had to determine the murder among them.

To authenticate the ambiance, guests were served popular snacks from the time, including pizza rolls. An auction and costume contest took place. Costume contest winners were Molly Nunemaker, who dressed as Molly Mingmold and Tom Nunemaker as Ivan Stinkman.

With the funds, the Wickens purchased 32 coats for children and eight pairs of snow pants.

Sabrina said she felt the fundraiser helped greatly to fill the need in the Niles community.

“I was blown away,” Wickens said. “I could not believe that these 40 people helped us do this.”

Wickens said she expected to raise a couple of hundred dollars. Thanks to the generosity of the community, the business was able to surpass this goal.