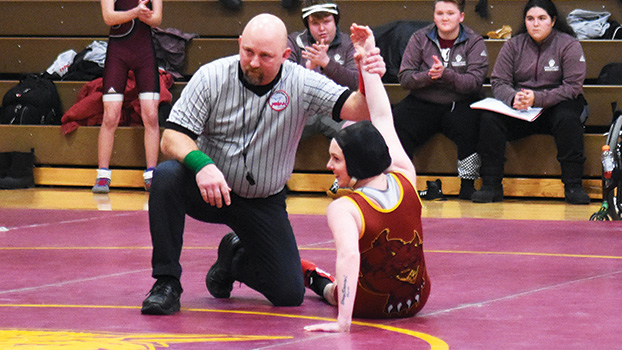 NILES — The Brandywine wrestling team had to wait nearly an entire season to host it first and only home match of 2018-19.

The Bobcats were set up to have an emotional night as they honored their one and only senior Searra Inman.

Inman has been an inspiration to many this season as she has continued her wrestling career despite being paralyzed from the waist down due to an accident she was in last summer.

Prior to the start of Thursday’s match, which was originally scheduled for last Wednesday, but postponed due to weather, the Bobcats honored Inman.

Brandywine would go on to split a pair of BCS Athletic Conference matches as it defeated Parchment 54-21 and losing to Comstock 48-34.

The Comstock win over the Bobcats, coupled with their victory over Buchanan in the opening round, gave the Colts the regular season title.

Brandywine and Buchanan will wrap up the regular season at Buchanan on Wednesday.

“This is probably the longest we have gone,” said Brandywine coach Rex Pomranka. “With the state cutting us down to 14 weigh-ins and you wrestle quads it rotates. This year we lost a quad and picked up another team tournament, so we only had six quads. It is hard.”

Pomranka, who has been one of Inman’s biggest cheerleaders since she informed him not long after her accident that she wanted to keep wrestling, knew it was going to be a tough night emotionally.

“It has been a long road,” he said. “It is winding down. She is five away (from 100 career wins). The television station was interviewing me, and I kind of teared up. We could be back here getting her 100th at team districts.”

Inman has been the face of determination ever since she was told she would not walk again. She has been determined to prove the experts wrong.

She decided immediately that her wrestling career was not over and she was going to figure out a way to remain not only a member of the squad, but to get on the mat again.

Promranka was all about helping his four-year letterwinner. He has worked with opposing coaches to get Inman forfeit victories. Some coaches have been more than receptive to the idea, while a few have not been.

But in the end, Inman will have a year’s worth of memories with her teammates and coaches.

Thursday night, she was ready to make her first appearance at Brandywine since leading the football team onto the field last fall.

“I have been waiting for this night, and I am excited,” Inman said. “It is exciting for me to be at home for our Brandywine matches because you do not have to be here that early. It kind of built up the excitement having to wait that long.

Inman knew there were going to be tears when she came in her wheelchair as the lone senior and then used her standing braces to acknowledge the crowd.

“It is going to be sad,” she said. “Because it is the last time wrestling at my school and pretty much the last time I get to see my coaches.”

Inman said she was positive from the get-go. She never thought her athletic career was over and set her sights on figuring out what she had to do to make it happen.

“Things have been pretty stressful lately with being back in therapy, going to school and wrestling in the evenings and all day on Saturday,” she said. “But the rest have been good.”

On the night, Inman finished with a pair of victories at 103 pounds.