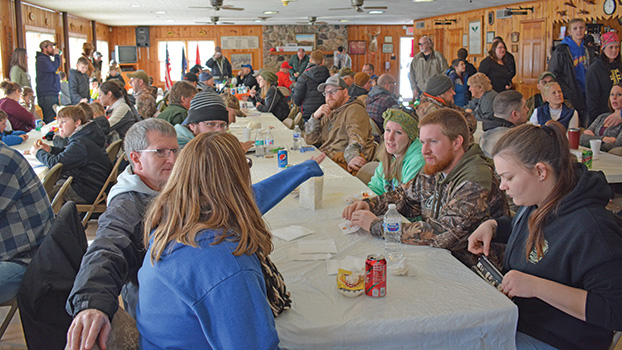 DOWAGIAC — Standing in front of a camouflage background Saturday afternoon, 9-year-old Brady Schau, of Berrien Springs, held a small, wooden box in his hands. He lifted the box to a microphone and slowly moved its lid to make a loud, screeching yelp — his best impersonation of a turkey call.

For the second year in a row, Schau was named the grand prize winner of a youth turkey calling contest, sponsored by the Berrien County Trophy Toms. The event was just one of several youth activities hosted Saturday during an annual event by the Dowagiac Conservation Club.

Many community members attended the event, with Maxey estimating that more than 200 people had visited the clubhouse by 2 p.m. Saturday. He added that due to a nearly even number of adult and children’s activities, the event saw more children attendees than in years past.

Several attendees said they appreciated the event and what the conservation club does in the community.

“It’s just a good time to get together with people,” Chad Schau said. “I think it is great [the club is raising money for youth programs]. They really do a lot in the community. They are really good for the youth.”

For Brady Schau, a youth member of the Dowagiac Conservation Club, he said he likes that he gets to go outside and learn about the outdoors through the club. Having been hunting since he was 5-years-old, he added that he is excited to take part in hunter’s safety courses this year.

“When you are out there, you get to learn more about the animals and the environment,” Brady Schau said.

Maxey said he appreciated the community’s support of the conservation club Saturday, adding that money raised from the Hunter’s Rendezvous will allow the club to continue to provide quality programs for children like Brady Schau.

“It’s awesome to see this many people come out and support us and the youth,” Maxey said.