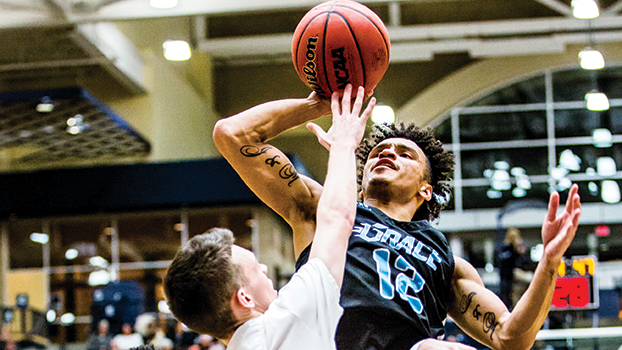 DOWAGIAC — In the middle of a 116-83 Grace Christian University loss to Davenport College on the road, former Dowagiac standout Brandon Winchester-Jones eclipsed the 1,000-point plateau for his career on Jan. 23.

It was not the way the three-year starting point guard for the Tigers would have liked to achieve that career milestone, but then again, Winchester-Jones was not sure he would ever score that much at the college level.

“I knew I could do it because I did it in high school, but you never know if you can do it in college,” he said. “But I put in a lot of work and dedication to this game and a lot of effort.”

Winchester-Jones finished the Davenport game with a team-high 23 points.

Having reached 1,000 points while playing for the Chieftains, the 5-foot-11 point guard headed off to Grace Christian, where this year, he has helped the Tigers to a No. 1 ranking in the NCCAA.

“The college game has slowed down and you have to a lot more poise when you make decisions,” Winchester-Jones said in a telephone interview on his way to Nashville for a pair of games. “I like playing for Grace. We are just trying to do as much as we can to get ready for regionals.”

The Tigers are on their longest bus ride of the year heading to Tennessee to face Welch College tonight and then taking on Crowleys Ridge College in the Welch College Tournament Saturday afternoon.

“This is the longest bus ride of the season,” Winchester-Jones said. “We were all sleeping on the bus this morning after leaving at 7 a.m. We went to Kentucky earlier in the season and that was eight or nine hours. This one is 11 or 12 hours.”

Grace Christian has five regular season games remaining, including a pair against the University of the Virgin Islands in St. Thomas, Feb. 1, before opening NCAA Mideast Regional play Feb. 21 in Knoxville, Tennessee.

Winchester-Jones said the Tigers are focusing on winning their final games in order to get a good seed heading into the regionals.

“There are always things we can improve on,” he said. “We can improve on our defense and being more aggressive. We need to knock down our free throws. We have to go into every game like it is our last one.”

Winchester-Jones is not the only former Chieftain on the Tigers’ roster.

Winchester-Jones and Grace Christian will wrap up their regular season at Andrews University in Berrien Springs Feb. 14. Tipoff is set for 7 p.m.