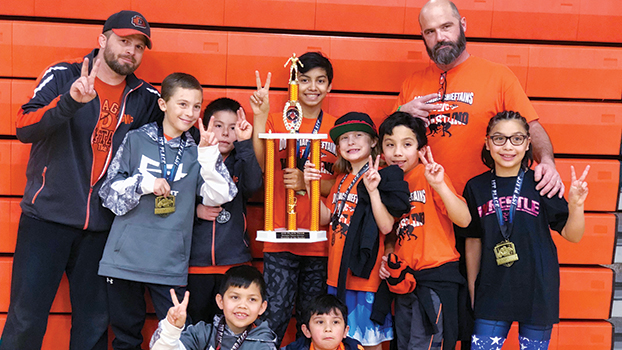 DOWAGIAC — The Dowagiac Youth Wrestling Club is nearing the midway points of their 2018-19 season.

The team had more than 50 wrestlers sign up this season,

“We saw increased interest among all ages,” said coach Jarrid Bradford. “Our club has been attending tournaments since early December and doing well.”

Dowagiac competed at the Sturgis MYWA tournament last weekend and finished second out of 49 teams. A total of 558 wrestlers competed in the event. Dowagiac brought home 11 individual medals.

It was the first even team trophy for the Dowagiac Wrestling Club.

Bradford had two pins and a major decision in winning the title at 85 pounds.

Cinthia Villegas, Bailey and Israel Villegas all finished with three pins to earn their first-place medals.

Oliver Olmedo went 4-2 and finish fourth at 43 pounds, while Rooney Olmeda was 4-1 and finished second at 61 pounds.

Jenna Bradford was a third-place finisher at 64 pounds with a 4-1 record on the day.

“Every point counted,” Bradford said. “Even those Dowagiac Wrestling Club wrestlers who did not place played critical roles by winning none-placement matches or just refusing to get pinned. Going into the tournament, the kids were challenged with taking some risks to earn as many points as possible.”

The team responded by posting 27 total pins and winning some close matches.

The Dowagiac Wrestling Club will again host its Rumble in the Jack on Sunday, Feb. 24.