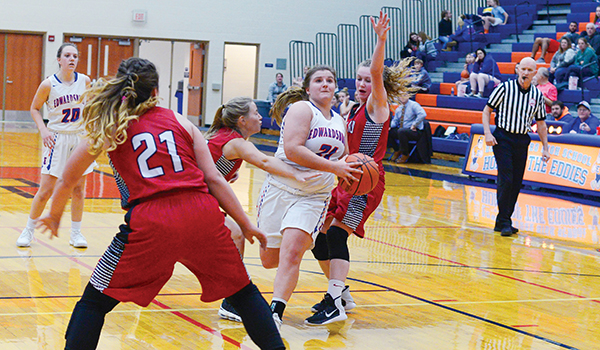 The win improved the Eddies to 10-0 overall and 3-0 in the Wolverine South Division heading into a showdown with second-place Three Rivers Friday night.

Edwardsburg jumped out to a 27-10 lead after one quarter and never looked back.

Kaitlyn Zarycki led Edwardsburg and all scorers with 19 points.

The Eddies also got 14 points from Claire Bartz and nine points from Abbey Krugh. Claire Alby and Kaitlynne Allen finished with six and five points respectively.

Hannah Vallier had 12 points to lead the Bulldogs, who drop to 5-5 overall and 2-1 in the Wolverine South.

VICKSBURG — The Eddies also came away with a win in the nightcap of the Wolverine Conference South Division doubleheader.

It was a close game throughout with the Eddies leading 7-6 after one quarter and 22-20 at halftime.

Edwardsburg outscored Vicksburg 8-0 in the overtime session as it improved to 4-7 overall and 2-1 in the South Division.

Zach Strycker scored 15 points and Colby Sidenbender 12 points for the Eddies, who also got nine points from Anthony Castelluci.

Tyler Kienbaum scored a game-high 21 points to lead the Bulldogs, who are 4-7 overall and 1-3 in South Division play.