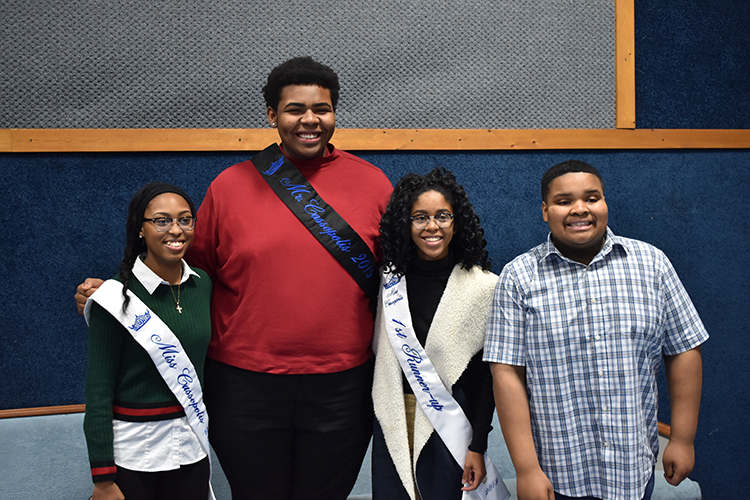 CASSOPOLIS — Early Monday morning at The Church of Cassopolis, with hot eggs, bacon and grits to share, four students from Cassopolis Public Schools read essays for Martin Luther King Jr. Day essay contest. Although the essays did not have to be about Rev. King himself, the essays were to be reflective of his legacy, highlighting individuals who carried on the legacy of black equality beyond the years of the Civil Rights movement.

Terryn Williams, Sydney Brooks, Chance Cook and Javier Long read essays about historical figures of their own choosing, each with profound ties to the manifestation of King’s dream. Williams, Miss Cassopolis 2019, wrote an essay entitled “Bravery in Words” about Malala Yousafzai, a Pakistani activist for female education and youngest Nobel prize laureate. Williams felt a connection to Yousafzai not only because of her work in fighting for educational rights, but also because she is a woman fighting for the rights of other women.

“If I was where she lives I would want an education, and I think it’s very important for everybody to have equal rights to an education,” Williams said.

Sydney Brooks wrote an essay entitled “Speak to Inspire” about one of her idols, Maya Angelou, the famed poet, memoirist and civil rights activist. Brooks read quotes from Angelou and referenced one of her most famous works, “I Know Why the Caged Bird Sings.” In her essay, Brooks spoke about the importance of defining success and why Angelou represents a proper and dignified example of success.

“I was trying to think of who to write about and the first person that came to my mind was Maya Angelou because there’s a lot of inspirational quotes and poems that I look up to and really wanted to incorporate that into my essay,” Brooks said.

Cook, Mr. Cassopolis 2019, wrote an essay entitled “Limitless” about Mae Jemison, the first black female astronaut who was on board the space shuttle Endeavor in 1992. In his essay Cook spoke about the importance of not limiting oneself and referenced Jemison’s life and work as a black woman who stood out in her field.

“I wrote my essay about her because I just thought she was the perfect example of a strong determined woman,” Cook said. “She set a standard for women and had a big voice.”

Long, the only junior high student to participate in the contest, wrote his essay about President Barack Obama. Long listed the many accolades and accomplishments President Obama achieved during his life, from becoming the first black president of the United States to his memoirs and winning the Nobel Peace Prize. In a symbolic gesture, Long finished his essay by raising side by side photo of King and President Obama, and said, “Martin Luther King had a dream, and Barack Obama is the dream.”

Cash prizes were awarded to the essayists, Williams placing first, Brooks second and Cook in third for the high schoolers. Long took first as he was the only contestant in his age group. All four participants attended the evening memorial ceremony at United Presbyterian Church to read their essays.

Organizer of the essay contest and former Cassopolis teacher Felomina Patton said the essays and reading of them for the community was important valuable to honor King’s memory and to inspire others.

“It is a matter of pride, a matter of learning what this event is all about… Dr. King’s legacy,” Patton said.

She also echoed the sentiments of the MLK Day events organizer, Carmen Peake, and the evening’s speaker, Rev. Catrinka Johnson, that remembering King and participating in his field of writing and oratory is ultimately for the benefit of the youth.

“I think it is very important not only for them, but for the younger students that can look up to them and say, ‘They are doing that, and I can do it, too,’” Patton said.