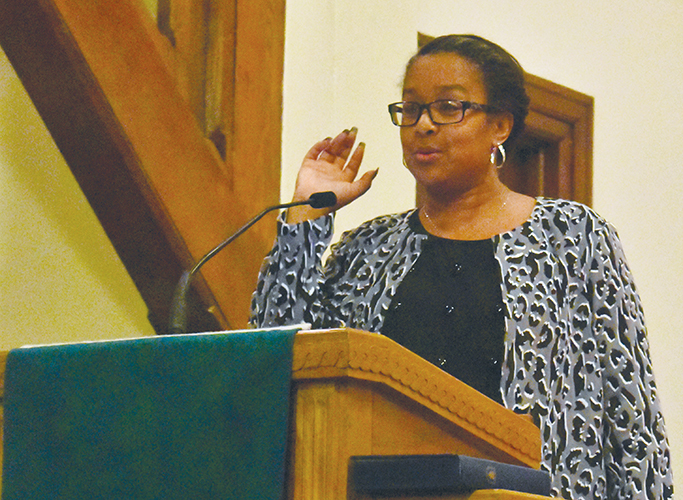 CASSOPOLIS — On Monday evening, after the sunset on a particularly cold day, dozens of Cassopolis locals congregated in the United Presbyterian Church on State Street in Cassopolis. The crowd gathered listened as songs were sung, skits performed and essays read by local students, and tributes made and speeches were given by local pastors. The evening’s activities were in honor of the memory of the Rev. Martin Luther King Jr. on the holiday the country designates to celebrate his life and work.

The evening began with the unified singing of the Black National Anthem (Lift Every Voice and Sing), which was led by student Vivian Williams. The ceremony continued with a prayer, then intermittent songs from the youth choir from First Baptist Church of Vandalia, four students from Ross Beatty High school and others.

The evening led to a final presentation and speech from Rev. Catrinka Johnson, the pastor of Connor-Mayo AME Church in Dowagiac. Her speech, entitled “Wake Up Everybody,” was about living the dream that Martin Luther King spoke of in his famous “I Have a Dream” speech. She spoke of the blindness within the culture, the importance of become aware of what is happening in the world and becoming people that live the reality of King’s vision.

“A dream is not a dream that just impacts the day. It’s a dream which affects today, tomorrow and the generation to come. To live out the dream of Martin Luther King Jr…. we’ve got to wake up,” Johnson said.

Johnson went on to say that the dream of King has not been fully realized, but that for it to become true, loving enemies must become a priority in the lives of ordinary people. Although she encouraged listeners to love their neighbors and enemies, she did not refrain from voicing harsh observances as part of her call to awakening.

“Don’t you see that on Sunday it’s the most segregated hour of the week?” she said. “(We are) spiritually asleep because (we) refuse to acknowledge the fact that racism is still here.”

The resounding message of Johnson’s speech was for a unified awakening, and she directed that message directly to the residents of Cassopolis.

“What are you all doing in Cassopolis? Have you all woken up? Have you thought about having a service like this once a month?”

Carmen Peake, the organizer of MLK memorial essays and evening service, believes honoring King with essays, speeches and music are simple steps toward carrying on King’s legacy and creating a more unified Cassopolis.

“He had the dream, but people don’t even know what the dream is, a lot of them,” Peake said. “It’s discovering that together.”

Peake and Johnson reiterated the need for educated and supported youth, something that Peake has been working toward by trying to found a nonprofit for Cassopolis youth. Until a time when the nonprofit is started, Peake believes bringing local youth and the rest of the Cassopolis community around the principals of King is a good starting place.

“They are the dream, and they’ll carry it into the future,” Peake said.